Compensation Conundrum: Do banks pay CEOs too much?

Banking has taken a beating in the media and court of public opinion in the past two years. Some of it has been unfair, particularly with how banks were associated with subprime mortgages (very few were originated by banks) and how community banks were lumped in with the practices of very large financial institutions (FIs). But if we are to be honest with ourselves, some of it is deserved and we should take positive steps to repair our image, better serve our customers, and lead us into the future.
I would like to look at three issues regarding our profession, and focus on Executive Compensation in this post:
1. Executive Compensation;
2. Fees; and
3. Product Pushing
Executive Compensation
My commentary may be the equivalent of digesting castor oil for some readers and it may not earn me fans in the executive suites of the very large FIs. But I do not think the value some executives deliver is commensurate with their compensation.
An egregious example is Charles Prince, former CEO of Citigroup. He took control of the behemoth bank when the stock traded in the $50’s, left amid huge losses in subprime mortgages when the stock price fell into the $30’s, and it is now trading at around $4. He didn’t receive severance, but he somehow received compensation and benefits of around $29 million at departure (see link). Was he worth it? I think I could have delivered that performance for much less.
In an era where community banks differentiate themselves on service and relationships, it is mysterious why we pay executives so much more than those responsible for delivering the service and building the relationships. I understand in a community bank environment executives serve this function also, but community FIs should examine their compensation strategies and the makeup of their employee base to determine if both are consistent with executing a relationship driven strategy. Paying the senior executive several multiples more than those that determine the success or failure of your strategy may not be a very good practice. See table below.

The CEO compensation in the table is highly skewed towards smaller banks, as my experience has been that they typically make more. However, I don’t want to suggest that CEO’s or other executives make less. On the contrary, I am suggesting that those most responsible for executing on your strategy are compensated more.
I understand the most extreme examples reside in mega-banks, but the video below represents how our entire industry may be viewed.

How can a community FI achieve a state where successful customer relationship staff are compensated more? The FI should look within itself. What percent of staff are dedicated to serving existing customers and winning new ones versus staff that is behind the scenes? In my experience, community FIs over-invest in outdated processes that should have long ago been replaced with technology. Having less support personnel frees up greater resources to elevate the quality of relationship management staff, improve retention of such employees, and differentiate you from the mega-bank.
What are your thoughts on your FIs compensation strategy?
I will discuss Fees and Product Pushing in future posts.
~ Jeff
Link to Charles Prince story
http://www.marketwatch.com/story/former-citigroup-ceo-prince-to-get-295-million-plus-bonus
Link to BLS stats
http://www.bls.gov/oes/current/naics2_52.htm
Posted by Jeff Marsico at 12:29 PM No comments:

The Tale of Two Banks, One Town

This blog post idea occurred to me several months ago but I have been hesitant to commit to print. My first inclination was to describe the main characters of the drama without actually naming them. This stems from the age-old maxim, "if you don't have something nice to say...". But the third quarter improvement to profitability by both banks represents a return to the way it has been over the past decade... the smaller bank outperforms the larger one. I'm talking about First Commonwealth Financial Corporation ("FCF") and S&T Bancorp ("S&T") of Indiana, Pennsylvania.

Most readers have no idea where on a map you can find Indiana, Pennsylvania. It's very name says "opposite", two states in one name. But if you bother to look at a map of the state, you will find Indiana in the James Carville description of Pennsylvania: "you have Philadelphia and Pittsburgh and Alabama in between". Indiana is in the Alabama in between. Think Punxsutawney Phil. Not exactly a budding metropolis; and yet it has two multi-billion dollar banks headquartered there.

Both banks have been experiencing loan problems. The problems stemmed from that unquenchable desire to get bigger. Indiana and its surrounding communities lack the growth that can support such ambitions. So both institutions determined in the conference rooms in the executive suite to expand lending beyond their geography. Those decisions amplified their credit problems in a challenging environment. At September 30th, FCF's non-performing assets as a percent of assets (NPAs/Assets) were 2.70% and S&T's were 2.05%. Not disastrous, but not that good, either. Lending outside of your expertise, either by industry, types of loans, or geography, oftentimes ends in bad results.

But in the midst of their challenges, S&T continues to outperform FCF. Year-to-date, S&T had an ROA of 1.07% and FCF had 0.24%. This was not an anomaly. S&T has had a superior ROA in every year that I reviewed (2001-2009). This flies in the face of the economies of scale crowd, that are running around to bank executives yammering for them to get larger or get out. As the chart below demonstrates, FCF has been larger than S&T. 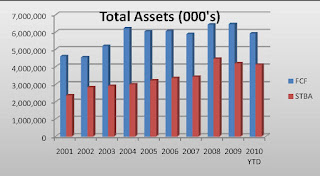 Some will object to my use of ROA as a proxy for profitability. But lets dispense of a debate on proper ratio analysis, and strip down financial performance to its rawest form, net income. Although FCF has always been larger, S&T has always delivered superior net income to their shareholders (see chart below). How could such a larger financial institution be outdone by its smaller competitor across the street? 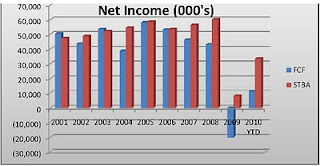 One reason is net interest margin. In all periods that I analyzed, S&T had a superior margin. Year to date, S&T's margin was 4.04% versus 3.88% for FCF. This flies in the face of the asset quality stats noted above. If S&T has a lower amount of non-performing assets, then it should have a smaller margin because it presumably lends more conservatively. Better credits would seem to demand lower loan coupons, one would logically think.

Another reason S&T consistently outperforms FCF is efficiency ratio (net interest income plus non interest income divided by non interest expense). Year to date S&T efficiency ratio was 52.11% versus FCF's at 61.29%. Similar to the other ratios, S&T was superior in every period analyzed. I understand efficiency ratio is impacted by the superior margin, but there is more to it than that. S&T simply operates more efficiently, spending their operating expenses prudently. This works against the economies of scale gang because S&T is over 30% smaller than FCF in total assets.

If not size, if not M&A, if not geography, then why does one consistently outperform the other? I do not think the obvious needs to be said, unless it is in the boardroom of First Commonwealth Financial.

Special note: I am not making stock recommendations here. So don't call your broker to make a trade based on what I write. If you saw the performance of my stock portfolio, you would know what I mean.
Posted by Jeff Marsico at 1:35 PM 2 comments:

A     The title of this book compelled me to read it, and I'm a better consultant for having done so. Strategy consultants such as me focus on keeping clients at least 10,000 feet up when discussing where we want to go in the next five years. But this doesn't mean that our knowledge base shouldn't be in the weeds. This book does a deep dive into the weeds of balance sheet management. 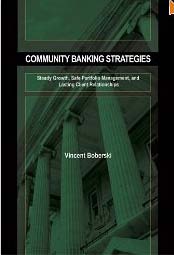 The author is very experienced in bank investment portfolio management. It appears as though the majority of his long career has been spent here. So his insights and analysis were critical to teaching me, and possibly you, about seemingly mundane yet important topics such as tax efficiency, derivatives, and BOLI.
At first I was becoming disappointed with the book, expecting to hear the author's point of view on what community financial institutions ("FIs") need to do to succeed in our brave new world. I realized the book was not going to go there when he started making references to specific Bloomberg screens.
But the author's detailed look at what type of investments should and should not be in an FIs portfolio and the characteristics of those investments was very instructive to me and any executive at an FI that is outside of the Treasury function. If you are an experienced FI portfolio manager, this book may not be for you. However, it makes a great refresher and an important reference book on the bookshelf. It can also help the experienced portfolio manager explain complicated financial instruments to other senior managers and the board of directors.
Here is what I liked about the book:
1.  Spoke specifics about various bonds and instruments to include in a FIs bond portfolio;
2.  Gave specific instructions on how to analyze those instruments;
3.  Taught me more about BOLI than I thought I needed to know but probably should know;
4.  Was published in 2010, so it has up to date lessons learned;
5.  Provided a great primer on derivatives to manage interest rate risk. A great quote: "Never manage interest rate risk through your customers". The author demonstrated how to give customers the loan they wanted and hedge the risk.
Here is what I didn't like about the book:
1.  Some may view it as overly technical and in the weeds, as I did when I first started calculating the cost of liquidity in my head (don't try this at home without proper supervision);
2.  Directs most of the book to balance sheet management. It does not discuss the customer aspect very much.
However, the minuses are very minor considering the pluses. I don't think there is another book out there for the non-portfolio manager to understand what is going on in 20%-25% of the FIs balance sheet, in pricing committee, or asset-liability management. This book will help you immensely in that regard, and I highly recommend it.
~ Jeff
Book Report note: I will occasionally read books that I believe are relevant to the banking industry. To help you determine if the book is a worthwhile read for your purposes, I will review them here. My mother said if I did not have something nice to say about someone, then don’t say it. In that vein, I will only review books that I perceive to be a “B” grade or better. Disclosure: I will typically have the reviewed book on my Amazon.com bookshelf on the right margin of this blog. If you click on any book on the shelf and buy it, I receive a small commission; typically not enough to buy a Starbucks skinny decaf latte with a sugar-free caramel shot, but perhaps enough to buy a small coffee at Wawa.
Posted by Jeff Marsico at 11:24 AM No comments: