Book Report: The Unbanking of America by Lisa Servon

Let me start with the author's ending: "In order to repair the system, we need a shared understanding that access to good financial services is a right, not a privilege for the fortunate few. We need to demand financial justice."

That is how the book ended. If I read it first, I probably would have returned it to the shelf. But no, I made the commitment to read it when recommended by a colleague, and it was quickly on my Kindle. Something about it being on my Kindle compels me to read it. So I trudged through it to get to her takeaways, which, when I read them, I could have guessed her bio before I read it. Professor of city and regional planning at the University of Pennsylvania.

Without further anticipation, here are the book's takeaways with a little editorial commentary from me:

1. Change the relationships between banking and government. She argues for renewed government involvement in the consumer financial-services sector. Stating the relationship has shifted to "favoring bank profitability and efficiency over public needs." She further argues the government doesn't hold banks accountable to serve all Americans equally well.

There were ideas in the book to accomplish this that I must report to you: a) Subsidize banks to serve customers with financial instability who are not profitable. b) Enable mission-oriented banks and credit unions to extend their reach. She cited Amalgamated Bank (lost $5.8 million over past five years), Carver Federal Savings Bank (lost $4.9 million), and Lower East Side People's Credit Union (only $50 million in assets, yet profitable on a 5+% net interest margin). c) Have the Federal government provide banking services. She cited Post Office banking as an example. Saying it would be "not for profit, simply because it's the right thing to do."

JFB editorial commentary:  Not sure the author was fully aware of the impact government involvement has had on those in the lower economic ladder. For example, the securitizing of the residential lending business moved most of that business away from banks to mortgage bankers and brokers, that far and away were the culprits behind preying on the underbanked. Perhaps a little light reading on the FHA, then later FNMA and Freddie Mac are in order. Dodd-Frank, the CFPB, and regulators "disparate impact" doctrine are pushing community financial institutions out of consumer banking. The Durbin Amendment and Reg E reduced fee income in checking accounts, making low-balance accounts difficult for financial institutions to cover costs. Costs foisted on them by, you guessed it, the Federal government through various laws such as BSA/AML. This resulted in the reduction of "free checking" and the increases in required minimum balances. So forgive me if I am somewhat indignant about sending in the Feds to exact more carnage. Oh, and we already have subsidized financial institutions to serve the underserved. They're called Credit Unions. They pay no Federal income taxes.

2. Enable better decision making. Hold financial service providers accountable by requiring them to make it easier to compare products and make informed choices. Like a fact-box on packaged foods.

JFB editorial commentary: Funny that she talked about the reams of disclosures that confuse the public. These disclosures are required by law and bank regulators. *irony*

3. Create a sandbox for innovators. She admits that regulation stifles innovation.

JFB editorial commentary: This is already happening, without government intervention. Even in spite of it. In a previous post, I offered that banks were slow to use alternative data for consumer loan decisions because of regulatory interpretation of the Fair Lending Act and the disparate impact doctrine. Alternative credit data to make loan decisions would benefit the underbanked. I fail to see how her clarion call for more government intervention sits with this recommendation.

Alright, I've given you enough of this book. When reading some of this stuff I first thought that the author was simply a pen name for Elizabeth Warren.

Are we doing the underbanked and unbanked any favors by pointing to a barely existent boogeyman behind the tree for their challenges? I Googled "free checking" and came up with multiple options. I once had very little in my accounts too. If I overdrew my account, I didn't write a tersely worded letter to my congressman. Yet this is how the author chooses to rationalize individual challenges.

It's the systems fault.

In response to someone overdrawing their checking account, consider the following reactions:

Person 1.  The big bank screwed you! Something must be done!

Person 2.  Ouch! You shouldn't overdraw your account. Let me show you how I avoid doing it.

I ask you: Which person cares more about the long-term well-being of the underbanked?

Why are banks slow to adapt alternative credit data? I'll tell you why!

In order to get federally sponsored deposit insurance, that is industry self-funded mind you, the Federal government and state governments set up a regulatory scheme to ensure the safety of customer deposits.

All have benefited. The banking system is stable, which is critical to national and state economies. Depositor money is safe. Also critical. And let's not forget about the thousands of employees that work for regulatory bodies, compliance personnel in banks, and consultants that help them comply.

So what am I talking about, that deposit insurance is why banks don't do like FinTech lending firms and use alternatives to the FICO score in underwriting consumer credits?

Our legislatures did not limit themselves to safety and soundness when they created banking law. No, they dabbled in money laundering, terrorism, drugs, Internet gambling, and, oh yes, fairness.

What does that mean?

Whatever you want it to mean.

So when yesterday's American Banker asked why alternative credit data was a hard sell for small banks, running afoul of the Fair Lending Act was a key concern (see table). 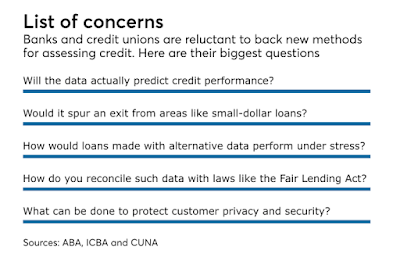 I would argue that using alternative data to make consumer loan decisions scares bankers because it has not played out with the "fairness" laws and regulations out there, and the disparate impact doctrine used by regulators to determine if a practice is discriminatory.

According to the FDIC, disparate impact occurs when a policy or practice applied equally to all applicants has a disproportionate adverse impact on applicants in a protected group. Even if it serves as a good predictor of a borrowers propensity to pay back the loan. If a financial institution uses payment of utilities in its credit decisions, and declines credit because prospective borrowers pay utilities late, this could have a disparate impact on a protected class. But bankers won't know that when they establish the criteria. They have to find out later, after a bureaucrat in Washington does a white paper.

This application of law will continue to be a challenge for financial institutions looking to compete with FinTech firms and mine other data sources to predict a customer's credit worthiness.

I got news for our lawmakers and regulators. I only know bankers that want customers to pay back their loans. And because deposit insurance is a national program, so should they.

Posted by Jeff Marsico at 5:37 PM No comments:

It's a team sport.

Sure, he's a hockey goalie. I doubt he knows much about banking. Or how good Boards function. But he can teach us that a high performing Board works as a team for their constituencies. For professional athletes, it's for their team, teammates, and town. For bank Boards it's for their shareholders, customers, communities, and employees.

I recently attended the Maryland Bankers' Association annual convention. I attend many sessions for my own knowledge. And for the benefit of clients, and today, my blog readers.

One interesting session was The Importance of Board Composition and Succession to the Future of the Enterprise delivered by Regina Pisa and Matt Dyckman of Goodwin Law. I know. The topic title was a mouthful. Lawyers.

Interesting because an early point they made was that "strategic planning and board composition should be inextricably linked." Provocative because they recommended diversity, but not in the politically correct way, but rather "diversity of skills, knowledge, and viewpoint."

And I say Amen!

Last September I did an analysis of the Board composition of the best and worst ROE banks to see if there was any secret sauce to the best, and a recipe for disaster for the worst.  I could find none. All of the carping over CPAs or former bankers meant nothing to the bank's financial condition or performance. Possibly to the chagrin of regulators who suggest or outright tell banks to put this person or that person on the Board.

What does matter in my opinion, and seemingly the opinion of the good folks of Goodwin Law, was the interaction between Board members and the Board and Management, determines if a Board is high performing or not. Don't take my interpretation of their words. Look at their slides. Lawyers have lots of slides. 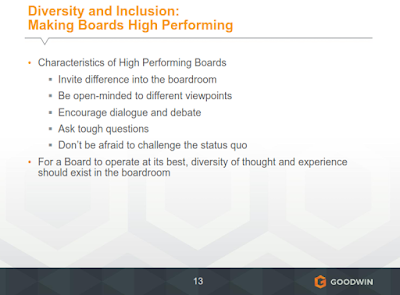 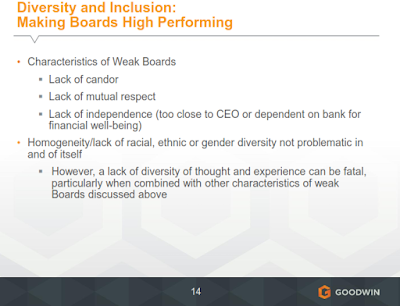 This is consistent with my experience.

If you want a high performing Board, consider it as a whole, deliberative body. If the body needs an arm, add an arm. Don't add another leg. This brings me to the other slide I'll swipe from their presentation (with their permission, mind you). 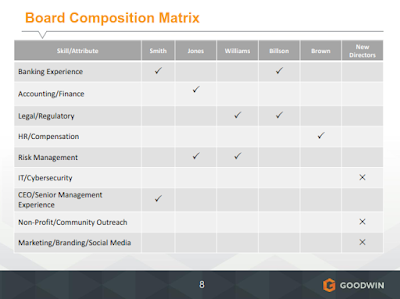 What you want is debate, but not for debate's sake or to hear those type A personalities talk. But debate to ensure management is following policy for safety and soundness. Debate that the Board reports are accurate, timely, and relevant. And debate to hold management accountable for pursuing the bank's strategy. Team players that build the team up and make the Board better.

What you don't want are yes men/women, gripers, or those that pursue self interest above all else.

Which brings me to Marc-Andre Fleury. Last season he was the Pittsburgh Penguins starting goalie. He got hurt and his replacement did so well he took Fleury's job. This season, Fleury served as the second string goalie although he is very, very good. He stepped in when the other goalie got hurt and delivered two playoff series wins. One against my Capitals!

He never griped. Never brought the team down. In fact, he built the team up when called upon. And his team spirit played a key role in delivering a second straight Stanley Cup to Pittsburgh.

That's why the Pens general manager called him "the best team player in sports". Because hockey is not an individual sport. It's the team that wins championships.

And so it goes with bank Boards.