The magi, thought to be named Gaspar, Balthasar, and Melchior, followed a bright star to find the Messiah. According to the Gospel of Matthew, they brought him three gifts: gold, frankincense, and myrrh.

The journey wasn't easy for the magi. At first, they did not know where they were going. And when they arrived in Jerusalem, King Harrod tried to fool them into discovering and reporting the whereabouts of this King of the Jews.

Although the magi's perils were greater and their journey quite a bit more significant than the modern day banker, I too see headwinds for community financial institutions, and wish for three gifts for them during this holiday season.

1.  I wish Artificial Intelligence ("AI") becomes real. The blaring horns about AI in the news and on social media is loud and frequent. I wish it was as loud and frequent within financial institutions. The truth is, we haven't had many wins yet. But it's coming. And my wish is that it comes soon. Because we continue to invest significant resources in operational functions that are the "keep the lights on" variety. Such as balancing accounts between disparate systems, solving for unread items, and trolling through accounts for suspicious activity. These are belt and suspenders type problems that the promise of AI should help solve. And in so doing, perhaps we can re-allocate resources that we tend to over invest in non-value added activities (see the below charts) and re-invest into a bank that delivers a truly superior customer experience, with highly trained and appropriately rewarded employees.

2.  I wish employee development rises to be the top strategic objective for banks that want to distinguish themselves through their people. I hear some variation of employee development in strategy sessions often. And see progress in employee development much less so. The fear that investing in functional fluency and a career path might lead to employee departure is real. So employee initiatives remain at the forefront of budget cuts. What if you train them and they leave? I believe your biggest threat is to let them languish and they stay. It's a sure sign that the scales will remain tipped toward investments to keep the lights on, as alarmingly demonstrated in the charts above. And don't statistics support that it is less expensive to develop from within than pick up people off of the street?

3.  I wish financial institutions to remain independent because they've earned it! The accompanying chart should be quite alarming for bankers. I know it is for bank consultants! So often, with recent regulatory activism, a severe recession, rising costs and needed technology investments, and fear of the pace of change, financial institutions' are deciding to throw in the towel. But it need not be so! For shareholder owned institutions, determine the desired return of those shareholders and build a strategy to achieve it (long-term), whether through capital appreciation or dividends. And balance the interests of your constituencies: shareholders, customers, employees, and communities. For non-shareholder owned, you still must earn your right to remain independent, achieve acceptable profitability to add to your capital base, grow, and remain relevant to those other three constituencies. Make it part of every planning retreat. Because if you don't know where you want to go, you're already there. 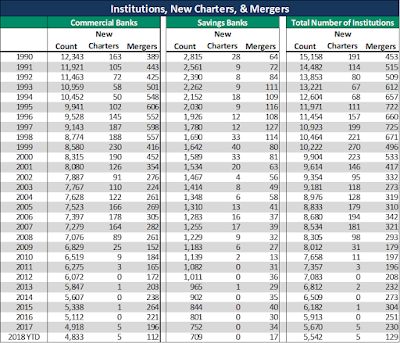 Those are my wishes for three gifts for bankers in the coming year. Instead of having three fellas from the east come and bestow them on you, make your own gifts.

I want to thank all of our current and past clients for the gifts you have given me and my firm. We appreciate every one of you. And look forward to serving you and new friends in 2019.

Posted by Jeff Marsico at 7:59 AM No comments:

For the past seven years I searched for the Top 5 financial institutions in five-year total return to shareholders because I promote long-term strategic decision making that may not benefit next quarter's or next year's earnings release. And I am weary of the persistent "get big or get out" mentality of many bankers and industry pundits. If their platitudes about scale are correct, then the largest FIs should logically demonstrate better shareholder returns. Right?

Not so over the seven years I have been keeping track. The first bank over $50 billion in assets was SVB Financial Group, at 208th on the list. The much heralded JPMorgan Chase: 229th.

Total return includes two components: capital appreciation and dividends. However, to exclude trading inefficiencies associated with illiquidity, I filtered out those FIs that trade less than 1,000 shares per day. This, naturally, eliminated many of the smaller, illiquid FIs. I also filtered for anomalies such as recent merger announcements, mutual-to-stock conversions, stock dividends/splits without price adjustments, and penny stocks.

As a point of reference, the SNL US Bank & Thrift index total five year return was 45%.

Before we begin and for comparison purposes, here are last year's top five, as measured in December 2017:

Carolina Financial Corporation is the $3.7 billion in asset holding company of CresCom Bank, which also owns Atlanta-based Crescent Mortgage Company. The Bank has 61 branch locations throughout the Carolinas. In 2015, the Company was recognized as American Banker's #1 bank for three-year ROE. This is clearly a turnaround situation, as the bank lost over $12 million in 2010, over 20% of its capital (ouch). Its non-performing assets to assets at that time... 9%. But once they turned things around they took their deferred tax asset back onto their books and did three acquisition. Today, NPAs/Assets is a stellar 0.46%, and the Company sports an ROA/ROE year-to-date of 1.27% and 8.91% respectively. These comeback kids have delivered a 398% total return to shareholders over the past five years. Welcome to the list!

Oregon Bancorp, Inc. is the parent company of Willamette Valley Bank, a community bank headquartered in Salem, Oregon. The Bank operates five full service offices. It also operates 13 Home Loan Centers in Oregon and Idaho. ORBN was $236 million in total assets at September 30 and barely eeked through our trading volume screen, trading about 1,300 shares/day, on average. But the Company is on pace to make $8 million this year (YTD annualized). Eight million! On a $236 million balance sheet. Demonstrates the potential value of a mortgage origination platform, if you can take the volatility. Year to date gain on sale revenues was $27 million. All of 2017 was $29 million. That is up from $6 million in 2014. So I ask readers, can you take the volatility? Because ORBN's year to date ROA/ROE was 3.63% / 32.08% respectively. You read it right. This type of knock the cover off the ball performance resulted in a five year total return to shareholders of 318%. Wow!

Farmers and Merchants Bancorp is the $1.1 billion in asset holding company for Farmers & Merchants State Bank (F&M). It has been serving the financial needs of individuals, farmers, businesses, and industries in Northwest Ohio and Northeast Indiana since 1897 through its headquarters in Archbold, Ohio and 24 additional branch offices. I always search for the "why" when banks excel in total return. For F&M, steady, superior financial performance appears to be their story. They've grown EPS at a compound annual growth rate of 12% over the past five years. Their year to date ROA/ROE is 1.41% and 11.49%, respectively. Thanks to good old growth and balance sheet management which saw their net interest margin expand from 3.49% in 2015 to 3.80% today. All of this blocking and tackling led to a five year total return to shareholders of 310% and the number 3 spot on the JFB total return list for 2018. Great job!

Fidelity D&D Bancorp, Inc. is the $950 million in asset holding company for Fidelity Bank that serves Lackawanna and Luzerne Counties in Pennsylvania through 10 community banking office locations providing personal and business banking products and services, including wealth management. And to them I say... finally someone from my hometown of Scranton breaks into the JFB top five in total return! How did they do it? You wouldn't have known they were destined for shareholder greatness in 2009 or 2010 when they logged consecutive years of losses due to credit woes. But bounce back they did! In 2011, they achieved an 0.85% ROA and a 10% ROE. One year after the climb! And they have consistent improvement since then. Today they are riding a 1.21% ROA and a 12.30% ROE. They have been a regular on the American Banker Magazine's top 200 ROE banks for five years running. And they were recently named as one of Forbe's top in-state banks, which uses customer experience metrics rather than straight financials. All of the hardware resulted in a 295% five year total return to shareholders. More hardware for you!

Plumas Bancorp is the $771 million holding company for Plumas Bank. Founded in 1980, Plumas Bank is a full-service community bank headquartered in Quincy in Northeastern California. The bank operates twelve branches, eleven in California and one in Nevada. It also operates four loan production offices, three in California and one in Oregon. Plumas Bank is an SBA Preferred Lender. In 2009, you wouldn't think they would survive, let alone make the JFB list nine years later. They lost $9 million that year, which was 25% of their capital! With the injection of Preferred Equity and Sub Debt they picked themselves up, drove down their non-performing assets/assets ratio from 7.48% in 2010 to 0.45% today. The Company grew EPS at a 29% compound annual growth rate since 2013, and is now sporting an ROA and ROE of 1.86% and 23.61%, respectively. Pretty good. That's why they returned 280% to their shareholders the past five years!


There you have it! The JFB all stars in top 5, five-year total return. The largest of the lot is $3.7 billion in total assets. No SIFI banks on the list. Ask your investment banker why this is so.

Posted by Jeff Marsico at 6:29 PM No comments: