Banking is under assault by lawmakers, regulators, and the public. What started as the mortgage crisis, advanced to a Wall Street crisis, and has devolved into what is known as a banking crisis. As consumers began defaulting on loans, the stereotypical media reaction demonized those "bankers" forcing people from their homes. Nary a word seemed to be said about people borrowing money from the banks and promising to pay it back while at the closing table. As the economic dominoes fell, so did banks, failing in numbers not seen since the 1989-91 S&L crisis. The end result, a black eye for our industry that brands us all in a not-so-attractive light.
Because banks take collateral, primarily real estate, as security for loans we are always in a position to foreclose on that collateral if the borrower fails to pay us back. It is far easier for the person that defaults to paint the bank as the bad actor rather than the bank defending itself by saying "we lent them money, they promised to pay us back, and they failed to do so". We don't defend ourselves because we don't want to discuss personal details about our customers. This is a good thing. But the public relations beating we are taking is beyond the pale. 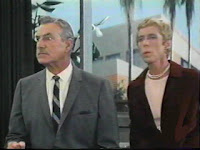 One negative impact is to paint the banking profession with the same broad brush as the bad players during the financial crisis. My firm specializes in working for community banks. Every week I am with management teams discussing strategy and profitability. Frequently, bankers lament how difficult it is to find top talent in key managerial posts. As I look across the table, it is less than common to see younger faces. Why does it seem young up and comers eschew banking?
One answer is branding. Bankers have always been painted in a negative light in pop culture. Think Mr. Drysdale and Miss Hathaway (pictured) in The Beverly Hillbillies or Mr. Potter in It's a Wonderful Life. But banking is mostly a noble profession with many benefits. I note a few here:
I have mentioned in previous posts that banking is changing at a pace unlike any other in my lifetime. Critical to community banking thriving in this new and emerging environment will be new, fresh faces bringing new ideas to key management positions to carry us forward. If you value the above, consider banking as a profession.
- Jeff
Posted by Jeff Marsico at 11:34 AM No comments:

Senator Chris Dodd (D-CT) and Representative Barney Frank (D-MA) were primary sponsors for the Dodd-Frank Wall Street Reform and Consumer Protection Act which was signed by President Obama on July 21, 2010. Rather than arrange for an actual interview with the lawmakers so they can give me non-answer answers, I envisioned how an interview with the esteemed gentleman might transpire. Here is how it played in my head:

jeff-for-banks (jfb): What is your definition of a "financial crisis"?
Dodd: When Joe the Plumber can't get a loan to buy a multi-million dollar home on Florida's Gold Coast. That's not just a crisis, it's tragic.
Frank: When Fannie and Freddie stop contributing to my PAC.
jfb: How did the Government Sponsored Entities, such as Fannie Mae, contribute to the financial crisis?

Frank: I don't think Fannie and Freddie are financially insolvent. I don't believe they require large bailouts (Note: Actual July 2008 quote by the gentleman from Massachusetts. See video below).
Dodd: Barney just told you they stopped contributing.
jfb: Should individuals be accountable for taking loans they could not afford to repay?
Frank: The necessary evil of capitalism is that there are evil forces intent on perpetrating ill-will on the working class and it is the responsibility of everyone to enlist government officials to stand guard against bad players regardless of the cost and reliance on government because we are here for you, the working class, not the rich.
jfb: Huh??? Senator Dodd, same question.
Dodd: Personal responsibility is so 1950's. It took the 60's enlightenment to end such a fascist concept.
jfb: I read that the Bureau of Consumer Financial Protection will have a $500 million annual budget. Is this accurate?
Frank: I hope not. Creating this bureau was a key provision in Dodd-Frank and a budget that doesn't end in a "B", or better yet, a "T", doesn't demonstrate our commitment to creating a black-hole bureaucracy.
Dodd: No worries. We'll charge it!
jfb: The Durbin Amendment requires the Fed to determine the "reasonable and proportionate" interchange fee that can be charged on debit and credit card transactions. Historically, when has price fixing worked?
Dodd: Nixon did it in the 70's with gas prices.
Frank: (laughs) Son, I understand you're a coal cracker from Scranton, had a hard-scrabble life, and may not understand these things. The Durbin Amendment is not price fixing. The Fed is only going to set the reasonable fee that can be charged.
jfb: How do you envision the Fed determining which systemically risky firms to unwind during a future financial crisis?
Dodd: Although the law is 5,000 pages, we left it up to the Fed to determine how to do that. I'm sure they'll do a good job.
Frank: I envision a panel like on the reality TV show America's Got Talent. Bankers like Jamie Dimon can make their case to Piers, Sharon, and Howie who can buzz him if they don't like his shtick.
Dodd: (laughing) Barney's kidding.
Frank: No I'm not. I love that show. Great concept.
jfb: Will Dodd-Frank solve the problems that created the financial crisis?
Frank: We are creating a financial system with greater government control and a new bureaucracy with a $500MM plus budget with significant powers. What could go wrong?
Dodd: What do I care? I'm outta here!
jfb: Thank you for your time gentleman.
Reminder in case you are an angry politico... the above was a figment of my imagination. Any complaints can be lodged to some government agency with a big budget that was designed so you can cry on their shoulder.
- Jeff
Posted by Jeff Marsico at 10:08 PM No comments:

On occasion I have the privilege of attending a banking conference in a swanky locale. Last month, I attended a gathering of Pennsylvania bankers at The Breakers in West Palm Beach, Florida. These conferences are typically chock full of opportunities for me to learn something. I feel it my duty to pass what I learn to you in the hope that you will benefit from it, as I have.
There were many good sessions, but the one I found particularly interesting was done by David Martin of Commonwealth Advisors. David competes with me in one of my firm's lines of business and it may not be wise of me to play him up. But I respect Dave's opinions as a result of his decades of industry experience and willingness to share his knowledge. I may not always agree with him, but I have always respected him.
His topic of the day was on making difficult decisions. Banking has changed slowly from the Great Depression to the late 1970's... a little quicker from the 1980's until 2008... and in a major shift since 2008. However, as Dave put it, "bankers and their boards often apply more sophisticated analysis to routine loan and investment decisions than they do to critical strategic decisions". If our industry is undergoing a long-term strategic shift, as I believe it is, we need to chart a course that gives us long-term relevance to our customers, communities, and shareholders.
Here are the eight steps Dave proposed for effective decision making (from Harvard Business Review on Decision Making by Harvard Business School Press, June 2001):
There are many challenges facing our industry that can be solved by implementing a disciplined decision making process to lead to better strategic decision making. I am confident more will emerge once the regulations resulting from Dodd-Frank start rolling off of the presses.
Rather than allowing these challenges to build up to overwhelming proportions, perhaps we should implement strategic decision making that is disciplined, focuses on the real challenges, and generates alternatives that will lead us into the future.
Alternatively, we could bury our head in the sand, complain about lawmakers and regulators, and pretend all is well with us and wrong with the other guy (see below for the "head in the sand decision making process").
- Jeff