Now that the holidays are over, it is time to recognize that January, 2014 marks the last month as Federal Reserve Chairman for our favorite helicopter pilot, Ben Bernanke. He was just in Philadelphia on January 3rd delivering his last public speech and he nostalgically proclaimed that “the recovery remains incomplete,” which will qualify his comment for the understatement of the year award.

Despite his heroic efforts, including a Fed Funds rate near zero for the past five years, forward guidance, scatterplots, press conferences, a new “openness,” and his trillion dollar QE bond buying programs, economic growth has not returned to “normal.” Our student of the Great Depression tried everything. He succeeded in saving us from true disaster in 2008, but has not been able to accomplish his goal of strong economic growth.

To put that GDP growth into perspective, consider that, in the three years following the recovery which began in June, 2009, real GDP averaged +2.2%. In the ten previous recessions, real GDP averaged +4.6% during a recovery. This helps to explain the Fed’s continued easy money policies, stretching now into year six. It also helps to explain my constant whining about sub-par growth!

Ben, we will miss you tremendously when you ride into the sunset on January 31st and we eagerly anticipate the reign of your successor, Janet “She Devil” Yellen. She will continue your zero rate policy and will “taper” your QE 3 program, because the markets have already dismissed its impact and tightened long term rates despite your wishes.

Incidentally, your QE 1 to 3 programs ran for six years, accumulated three trillion dollars of securities, and pushed long term rates lower when your forward guidance could not do so. But in nine short months of 2013, you and the Fed stumbled with mixed signals and miscommunication and the markets pushed the 10 year Treasury yield up by 130 basis points to 3.00%, removing all of the good attained by QE over the years.

This anomaly occurred despite inflation readings that are trending downward in both the producer and consumer price indices. Mortgage rates rose just as much and they may potentially damage the housing market recovery. Another anomaly continues in that the 3.00% yield on the 10 year Treasury is much higher than the dividend yield on the S&P 500 index of 2.15%. Stocks are supposed to have more risk. That is all I will say on stock markets, because they usually sell off once I write in depth about them, although PE ratios are fairly average and don’t call for huge correction. It shows that while the Fed may have a tight grip on short term rates, the market will decide long term ones.

We expect that GDP growth will continue in a cautious mode in 2014, likely between 2% and 2.5% once again. Many of our bank’s customers remain cautious about borrowing and spending on large projects. Many businesses remain uncertain due to the increased regulatory burden, the drama in the insurance markets due to Obamacare, income tax changes, and a still high unemployment rate at 7%, which serves to keep personal incomes in check and consumer spending under wraps.

Despite the “headwinds” mentioned above, the Federal Reserve has very optimistic GDP forecasts for future years, with 2014 at 2.8% to 3.2%. The National Association of Business Economics, or “NABE,” is almost as optimistic at close to 3%. Some of Wall Street’s brokers expect more moderate growth, with Sterne Agee at 1.7% to 2.3% and Janney Capital Markets at 2.1% to 2.5%.

I find it interesting that these same forecasters expect continued drops in the unemployment rate, with the Fed lowest at 6.3% to 6.6% in 2014, yet growth is not even returning to the normal post-recession pace of 4.6%.

That is because the unemployment rate itself is also an anomaly, having fallen from above 8% in the third quarter of 2012 to 7% in November, 2013, mostly from people dropping out of the labor force and not from the measly pace of job creation, whether viewed from the payroll or household survey. The labor force participation rate has fallen from 66% pre-recession to 63% currently. The primary aggregate impact on the economy of this difference of 3 million workers no longer participating in our labor force is reduced income and thus, reduced purchasing power.

And so, we find ourselves over four years removed from the end of the last recession, a time when most recoveries would be ending, and this one has barely begun. The data as of late has continued to improve. Real GDP grew by 4.1% in the third quarter of 2013, but the strong growth numbers were the result of huge inventory building, to the tune of nearly $116 billion annualized. No wonder retailers were slashing prices for the Christmas holiday spending season.


This high GDP number aside, we still have slow growth and structural changes occurring in our workforce, resulting in less income, less spending, and more incessant whining by me.

Businesses are still cautious in capital spending. Several wild cards may improve growth—such as energy availability and prices, improvement in overseas economies in Europe and Asia, and our new Fed Chairman, Janet Yellen, who should follow the low rate policies. And so, all of this adds up to cautious optimism for 2014.


Our Philadelphia Eagles excited us and made us optimistic that their 2014 will be bright. We can be proud of what they achieved this year under new coach, Chip Kelly. I keep thinking back to the Phillies playoff loss in 2007, which taught them “how to lose” before they came back strong and won it all the following year in 2008. Just saying...

And so, as I finish writing this, the polar vortex is about to give us two of the coldest days and nights in over twenty years. But we count our blessings; it will be back above freezing in a few days.


Dorothy Jaworski has worked at large and small banks for over 30 years; much of that time has been spent in investment portfolio management, risk management, and financial analysis. Dorothy has been with First Federal of Bucks County since November, 2004.
Posted by Jeff Marsico at 11:17 AM No comments:

American Greed: Can being an honest broker be banks and credit unions competitive advantage?

Americans are becoming more responsible for their financial well being now and into retirement. According to a 2012 Boston College Center for Retirement Research study, 63% of American males (why only males I do not know) participated exclusively in defined contribution (DC) retirement plans in 2007, up from 47% in 1992. Those that participated in defined benefit (DB) pension plans was 16% in 2007, down from 31% in 1992. We are increasingly bearing the burden of managing our money.

Yet money management is a discipline done well by only a very few. My firm, full of banking industry consultants, just held an education session regarding our 401k plan. I would say, for me, it was interesting and educational. I will probably select the auto re balancing feature because I don't want to take the time to actively manage it. Will I take the time to do a good job researching my fund choices. Probably not.

So, if those involved in banking don't have the time or inclination to do it, how about the engineer, retail store manager, or forklift operator? I think, as a nation, we will need lots of help managing our money. Not just in retirement, because day to day money management is becoming more complex too. Gone are the days of keeping money in an envelope in the nightstand to save for a new refrigerator, or to pay the annual insurance premium.

Could this need for personal financial management prove to be a viable niche for community financial institutions? I think so. One reason is the amount of fraudsters that will emerge with messages of help and hope on an unsuspecting population, only to turn the helping hand into a backhoe to rake their customers cash into their own bank account. Don't believe me, check out a few episodes of CNBC's American Greed, a favorite show of my wife and I.

Although fraudsters don't typically use a community bank or credit union as home base for their antics, some do, such as Aubrey Lee Price who defrauded a community bank in Georgia for $21 million. Most fraudsters establish their own small financial services firm to do their work. Others use very large financial institutions that can only loosely be called banks. My point is that bad actors are not typically associated with the local bank or company credit union.

With this in mind, can the local community financial institution be viewed as the "go to" resource for those of us that are dazed and confused on how to manage our financial lives? Can we brand ourselves as the trusted advisor in our communities?

If so, we have to ask ourselves if we have the personnel, processes, and systems to execute on such a strategy. Because if we position ourselves as our customers' trusted advisor, and can't deliver, it will be difficult to overcome the negative brand perception.

Can we specialize as the trusted source for personal financial management?

The low operating expense bank typically comes with a limited branch network. Bank futurists think this a good thing since branches are millstones around our collective necks. So in order to attract deposits, these banks tend to use premium rates to get people comfortable with not having a nearby branch.

Low expense banks tend not to have sophisticated commercial banking operations too. Preferring instead to focus on residential real estate lending combined with transactional commercial real estate lending. By transactional, I mean the bank may resort to price to get deals, and not extensive customer relationships, as many of these customers don't value relationships anyway.

Conversely, low cost of deposit banks tend to have more expansive branch networks to get core retail and business account balances. Anecdotally, the most often heard reason a business customer objects to opening an operating account at a bank is because it lacks a nearby branch. But, admittedly, that could just be an objection that is not the "real reason".

So which strategy results in better performance? I went to the numbers (see table), and it's tough to tell. 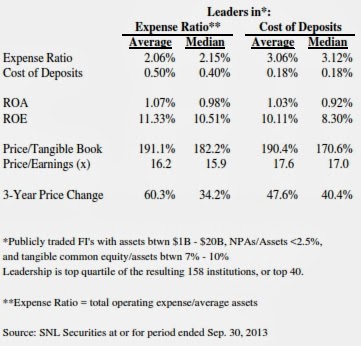 I searched for banks of a certain size ($1B - $20B in assets) to eliminate trading anomalies from very large and very small banks. I also controlled for capital levels and asset quality to limit the number of factors impacting pricing.

The picture is not totally clear on which strategy delivers the better returns or higher trading multiples. To be sure, both sets of top quartile banks are well run and rewarded with relatively high trading multiples. And they have delivered very good results, as indicated by their 3-year price changes.

So, which one is better? I think it depends on each financial institution's individual circumstances. Do you operate in slow to no growth markets? Perhaps a low operating expense/cash cow strategy is appropriate.

Is your FI in business-rich markets and your niche is concierge-like service to tech firms? Well the low cost deposit strategy with higher expense ratios may be appropriate.

Whatever strategy you choose, I implore you... to choose. The zigging and zagging, the all things to all people, the yes, yes, and yes strategies are misallocating resources and driving our financial institutions into homogenized and commoditized, irrelevant, soon to be sold and quickly forgotten memories that our 7,000 brethren that have been sold since the early '90's have become.

Are we going to let it happen?

Posted by Jeff Marsico at 8:03 PM No comments: