Figures don't lie. Financial Institution (FI) customers interface with us online far more frequently than in person. Has our organizational structure evolved to meet this challenge? I think not.

This post is geared toward drafting a job description of an FI EVP of Distribution and Service Excellence. Flowery name, I know. I also look at names such as Chief Experience Officer with extreme skepticism. But this position is different. And it's not my idea. I first wrote of such a position based on an idea posed by a student in my class at the North Carolina School of Banking.  I envision the person occupying this role to be a savvy marketer with strong IT skills, as well as senior leadership abilities. Here is my job description for such a position.

EVP of Distribution and Service Excellence

Summary of Responsibilities: Member of Senior Management... As a member of senior management, this person participates in setting and executing the FIs strategy. Ensure compliance with all industry laws and regulations. Assist the Board in setting organizational policy and develop procedures to follow policy. Run the FI in a safe and sound manner. Participate in community events and represent the FI within the community. Join one community organization consistent with FI strategy and employee interests/values and be active in the organization's leadership. Participate in trade association(s) and assume a leadership position in at least one industry trade association.

Marketing and Product Development... Direct supervision of the Marketing and Product Development department. The department's responsibilities are to collaborate with business line leadership in developing tactics to deepen existing relationships and win new relationships with customers consistent with strategy. Develop and support a brand that is consistent with strategy, including traditional and non-traditional advertising, social media, and service excellence criteria. Develop products and product packages consistent with customer wants and needs and FI strategy.

Training... Direct supervision of the Training department. Collaborate with department supervisors to develop development plans by position that focuses on skills consistent with the FIs strategy, technical, and compliance training. Develop leadership and supervision training so supervisors have the skills to motivate employees, identify high performing employees, coaching, and improve overall team performance. Manage the training aspect of FIs Succession and Executive Development plan. Be the champion to expose high performing employees to different disciplines within the FI. Ensure compliance training is consistent with industry standards.

Other duties as assigned.

Is it time to elevate technology from the current bits and bytes mentality, which in my opinion is why IT ends up reporting to an operations officer?

Historically low interest rates and the recent poor economy highlighted the importance of leadership in community banking. History has provided us great leaders to emulate and Abraham Lincoln is perhaps without equal. In my opinion, he demonstrated three critical qualities of leadership.

Vision - Burt Nanus in his book Visionary Leadership contends that vision is inherently idealistic and represents a "mental model of a future state of the... organization." George H.W. Bush brought attention to this key leadership quality when he declared he lacked "the vision thing."

Communication - A vision is only introspection without the ability to communicate it and rally stakeholders behind it. But helping others understand the vision is not enough. The purpose of communication is to motivate others to act.

Lincoln was not sowed from the cloth of privilege. He was a simple man that was able to connect with most Americans using simple anecdotes. Presidential historian David Abshire commented: "This genius of Lincoln's words and ideas -- derived from the Bible, Shakespeare, Bums, and Bunyon -- lent an historic quality to his rhetoric and persona."

Why was Lincoln such a great communicator? His messages were simple and easy to understand. How many speeches, presentations, meetings and sermons have we endured that we have little or no recollection of? The reason is simple; the message wasn't simple.

You may remember Edward Everett, a great orator of the 19th century. Chances are you don't. At the consecration of the most storied battlefield in our nation's history, Everett delivered a long-forgotten two-hour oration. After him, Lincoln approached the podium and delivered the Gettysburg Address.

Commitment - Having vision and effectively communicating it does nothing in itself. Commitment is the doing. Many leadership experts contend that people follow committed leaders, not a vision. Divorce vision and commitment, and all that you have is an idea... an idea with no disciples.

To preserve the Union, Lincoln shelved the Constitution when the nation that held it as law was in jeopardy. Said in one of Lincoln's memorable anecdotes, "By general law, life and limb must be protected; yet often a limb must be amputated to save a life; but a life is never wisely given to save a limb." Putting aside the Constitution to use any indispensable means to preserve the Union demonstrated Lincoln's commitment to his vision.

As time passed and Lincoln's commitment was clear, tenacity and courage infected every level within the Union ranks. At the outset of the war, military commanders were not clear about Lincoln's commitment to preserve the Union. General McClellan exemplified this confusion by not pursuing Lee's army after initial successes in Virginia.

Near the end of the war, Lincoln's commitment was clear as General Sherman was burning Atlanta. Followers witnessing Lincoln's degree of commitment put forth the great effort necessary to achieve success, although the risk of failure was great. Why take the risk? Because a great leader will not yield, will not relent, and will not quit.

Abraham Lincoln was by no means a perfect leader and it was not his flawless leadership that categorizes him as one of history's greatest leaders in times of crisis. Rather, it was how he adapted to the crisis situation by first formulating his vision, then articulating it, and lastly standing by it at all cost. Indeed, for all these reasons, Lincoln was one of history's greatest leaders.

Note: This has been reprinted from the February 2004 Pennsylvania Association of Community Bankers newsletter.
Posted by Jeff Marsico at 10:08 AM No comments:


I tend to envision strategy flashing on marquee billboards. Here is how I see the end result of a multiple day big bank retreat conducted in a Kiawah Island resort conference room, prior to a round of golf, massage, cocktail hour with Talisker 8-year-old single malt scotch, and topped off with a Maine lobster dinner, no truffles because of the poor economy. 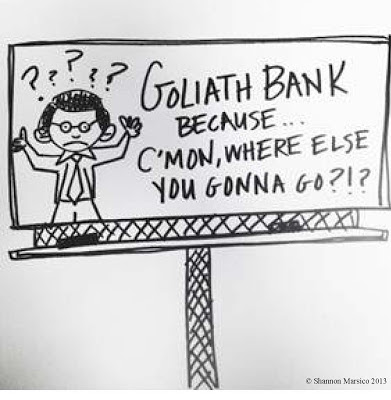 Three ways banks can support innovation in their markets.

Why did Willie Sutton, famous bank robber from the 1920's to 1950's, rob banks? "Because that's where the money is." Sutton, by the way, denied the quote. But we can't deny it's true. Financial institutions remain the place to go for money.

So why do FIs opt for the sideline in participating more fully in innovation? I recently wrote on these pages that FIs should develop Shark Tank like processes to get early stage equity capital into the hands of nearby entrepreneurs to fuel growth in local markets.

But bankers generally don't like to be at the tip of the spear in product and service offerings. In many cases, it's far too risky to undertake a strategic direction that has been untested. The potential for failure is greater. So we opt for making incremental improvements to business as usual. But in my opinion, business as usual is a riskier course. Better to innovate and go out swinging, than to remain mired in the past and go out with a whimper. 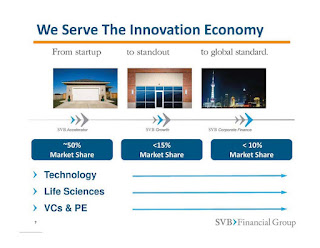 But there are some leading edge bankers to use as your guidepost. Take Silicon Valley Bank in Santa Clara, California. Here is a bank that nurtures start-ups from the garage to global distribution (see picture from their investor presentation). Through their Accelerator Solutions, they package products, expertise, and connections into one business unit to improve the likelihood of start-up success. The bank has maintained an ROA at or near 1% throughout the financial and economic doldrums.

I understand SVB's location allows them to specialize in serving tech start-ups and venture capital firms. But innovation need not start in northern California. In fact, I would put to you that this region benefits tremendously by having nearby support systems that foster innovation. Your markets can too. And why can't it start with your FI?

Here are three things I think your FI can do to foster greater innovation in your markets that can drive economic prosperity, and therefore your success, for generations:

1.  Develop specialized expertise within your FI to help entrepreneurs get their businesses off of the ground;

3.  Find creative means to get capital in the hands of promising companies. This can be done through equity funding similar to what I proposed in my Shark Tank post, partnerships with various VC firms and institutions such as nearby insurance companies, factoring firms, etc., or outright balance sheet lending so long as you put a wall around the risk.

Should we continue to lament about our local economies or should we do something about it?

P.S. Subsequent to this post, Inc. Magazine published an article It Might Be Time to Break Up With Your Bank describing great alternatives to bank financing for small businesses. Why can't we either do this lending or develop relationships with reputable lenders, as determined by our due diligence, and serve as brokers to this financing and advisers to our client?

Posted by Jeff Marsico at 3:10 PM No comments: