A Bank Analyst Makes Recommendations. I Make a List.

What should you look for in a bank stock?

How should I know? I'm not a financial advisor. I would have to take a test to prove that I am worthy of such predictions.

But I read. And part of my reading includes Boenning & Scattergood's quarterly Bank DCF Analysis. In the report, analysts Matt Schultheis and Scott Beury laid down the criteria they recommend investors use when evaluating bank stocks:

Well, ok then Matt and Scott. I'll search on that.

I sorted all publicly traded US banks on the following criteria: year over year asset growth (2016-17) greater than 10%, tangible equity/tangible assets greater than 9%, and CD's as a percent of total deposits less than 30%. I also filtered out banks with greater than 2% non-performing assets/assets.

This netted a total of 78 banks ranging in asset size from $113 million (Republic Bank of Arizona) to $44 billion (Signature Bank). No SIFI banks.

I then set out to single out the best bank in a few of the categories. The first was for growth, as measured by year over year asset growth. I skipped banks that grew via acquisition during that time. The second was to highlight the most favorable deposit mix, as determined by the lowest level of CDs. I know this is imperfect. There could be ample municipal deposits in checking or money market accounts. Not an ideal funding source but also not CDs.

The third category was performance judged by their first quarter 2018 ROA. Again, not ideal. But directionally correct. The fourth was value based on the bank's price/tangible book. Most of the 78 financial institutions were below $1 billion in total assets. Investors tend to favor price/book metrics in looking at smaller institutions. The lower the multiple, the more value that might be on the table for the investor.

The last category was a balanced approach between all of the measurements I used, including EPS growth. There was judgement involved and I must admit I tended to discount the smaller financial institutions because of their low trading volumes and inefficient valuations. Personal bias, I know. My apologies to Metro Phoenix Bank ($181 million in assets, 1.88%/11.83% ROA/ROE).

The results are in the table below. 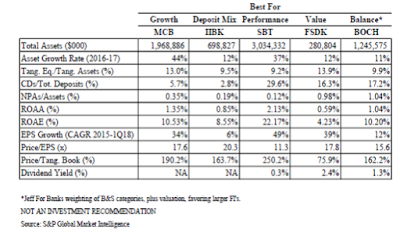 Drop me a line with your contact info if you want the spreadsheet with all 78 banks.

"The legacy [of build it and they will come] is an inefficient allocation of resources dedicated to supporting a less relevant delivery channel..."

So went an informative branch research report put out by my old friend and excellent bank stock analyst, Matt Schultheis of Boenning & Scattergood. At lunch recently, he said that the battle for retail deposits has already been won. Won by the national banks. It is a very similar point I made in an article to soon appear in a trade publication.

With all of our hubris about how great community banking is compared to national banks, we are not winning market share from them.

Here are some additional points I made to Matt via e-mail after I read his branch research piece. Edited for your clarity and context. All comments are my own, as his firm is a broker-dealer which would require a monumental amount of compliance review and disclosures. To wit, the research report actually used the term "Flavor Aid" instead of "Kool Aid" because it is likely a compliance person wouldn't let them use the obvious. #AddingValue


Point 1: Pricing is becoming more transparent and I believe it will be increasingly difficult for banks to maintain deposit betas of 12 to 25, as [the research report] demonstrated in Exhibit 2. It is much easier now to switch from a local bank money market account to a Goldman Sachs Marcus account than last year, and it will be even easier next year.

That is why I suggest banks build a cost of funds advantage by 1) having a relatively higher proportion of non-interest bearing checking, and 2) a relatively higher proportion of "store of value" accounts like interest bearing checking and special purpose savings. I define store of value accounts as those where depositors are looking for safety and ease of use/access more than rate. Such as having a real estate taxes savings account.

Point 2: I am not sure deposit market share is the metric for branch success [as mentioned in the research report]. I believe it is branch deposit size, growth and spread delivered by those deposits. The challenge with the 3,000 square foot to a 1,500 square foot branch transformation is that larger branches tend to have more deposits.

A former bank CEO, responding to my questioning one of his branch's multi-million dollar expansion, said he got $40 million MORE in deposits when he did it. The math looks good in that context. Great actually.

Over and over we see these tiny, cutesy, 1,000 square foot branches maxing out at $20 million in deposits. I say put in a big branch and get $60 million, which is the average branch size in our profitability outsourcing service. The deposits per square foot calculation works out marvelously. Perhaps lease part of the branch to a CPA or a small insurance agency or something that tends to serve the same customers you are targeting to recoup some of the build-out and real estate taxes that come with a larger branch.

Point 3: You can "spoke" from the larger hub, as the research report suggests. And if your spoke maxes out at $15 million over a reasonable time, then close it and transfer those deposits to your hub. At an 80% retention rate, Charlie Sheen would call that #winning. Another strategy would be to measure the profitability of the hub/spoke region, rather than holding every individual branch accountable for spreads and profits. Although either is better than total deposit or number of accounts goals.

Point 4: The median direct expense of a branch as a percent of deposits in our profitability database is 98 basis points. That's 98 basis points that a branch bank can't pay in interest to their depositors that Ally Bank can pay. Perhaps that's overly simplistic as Ally has elevated digital expenses, low pull-through rates, and higher back office expenses because they have no branches.

But let's say that accounts for 20 basis points on the margin. Still a 78 basis point beta. Banks have to figure out how to sell the advantage of their branch network, which by the way survey after survey says customers want, and figure out a way to lower the 98 basis points direct expense of branches or support center expenses. Preferably both in order to lower that 78 basis points. Because customers won't accept that size of a haircut for the convenience of having a branch. But I believe they will accept some haircut.

By the way, the 98 basis points direct expense is off of a $60 million average branch deposit size. That means it costs ~ $588k in direct operating expense to run a branch. If you go with a wee-little branch, perhaps you shave off $150k of that. If that branch maxes at $20 million, then your branch direct expense of the "branch of the future" is 2.17% of deposits, versus 98 basis points for the "branch of today". Which is better?

Posted by Jeff Marsico at 1:45 PM No comments:

"The FDIC recently has observed instances of liquidity stress at a small number of insured banks." So opened the Summer 2017 FDIC Supervisory Insights issue. And so went your exams.

At a recent banking conference an industry consultant said, matter of factly, that in times of stress your Federal Home Loan Bank (FHLB) borrowing capacity would dry up. Nobody challenged him, including me, by the way. But when I mentioned the comment to the attending FHLB rep, she was not particularly happy.

This has happened before. Regulators and consultants promulgate this untruth. And having heard it so much, bankers are beginning to believe it.

This week I sat in a bank CEO's office where he complained, ranted really, about his latest exam and the regulators' perception of liquidity risk, driven by the aforementioned Supervisory Insights. He was confident in his bank's liquidity position, but felt regulators could artificially create a liquidity problem.

Their conversation goes something like this: pretend that your non-core and wholesale funding dries up, and you are unable to attract local funds via rate promotion because of our restrictions on rates paid above the national rate cap. What would you do? Prepare for that.

I recently wrote that I thought bankers would have to prepare to offer rates more in line with the market. I noted that there was a greater than 100 basis points difference between what a customer could earn on an FDIC-insured Goldman Sachs Marcus account than what they could earn in your bank's money market account. And that bankers are going to have to build the infrastructure that allows them to be closer to market. 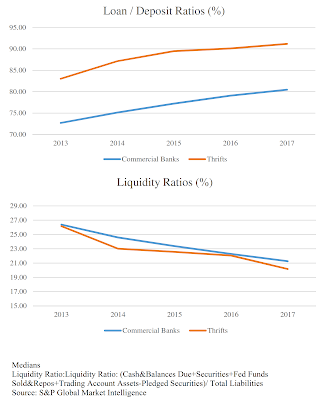 correspondent line(s), you can't attract local deposits, your municipalities withdraw, and your FHLB line "dries up", all at once? As the FHLB rep mused to me, it could happen if say, an extreme black swan event much worse than the 2007-08 financial crisis happened.


More to the point, she directed me to her FHLB's president's message on their website where he wrote: "As long as markets remain open, and a member has pledged sufficient qualifying collateral and is willing to purchase the requisite amount of capital stock, the Home Loan Bank will always continue to lend to our members to help you meet your community's needs."

We need a smarter discussion on liquidity. Before we create an artificial liquidity crunch.

The consultant at the above mentioned conference did have some solid recommendations that I would like to share, even though he is a competitor. Pretty magnanimous of me, right?

4. Update liquidity policy and contingency funding plan to be consistent with the above process

Are you feeling pressure internally or from regulators on liquidity?