Banking Strategies: Should We Look to Utah?

If you could build a bank that delivered a 2.49% ROA, twenty three percent deposit growth that is 100% core, and zero non-performing loans, would you do it? That is exactly what Salt Lake City's Optum Bank delivered.

Just this month I taught Bank Profitability at the Utah Bankers' Association Executive Development Program. Utah, home of the Industrial Bank, is the epicenter of niche banking... i.e. banks chartered to focus on a narrow strategy. Now, how many of you are rationalizing the performance of Optum Bank from the first paragraph, thinking, "oh, it's only an Industrial Bank"?

Optum Bank is owned by UnitedHealth Group, a health insurer, to specialize in Health Savings Accounts. It opened for business in 2003 and hasn't been below a 2% ROA since 2005. If you could deliver such performance, would you?

One of my students at the UBA's EDP was from EnerBank USA. Here is another Industrial Bank that has a specific niche, lending to homeowners for home improvements through construction contractors or home improvement supply dealers. EnerBank is owned by a utility company. Many community bankers would roll their eyes at such banks. But look at EnerBank's performance! 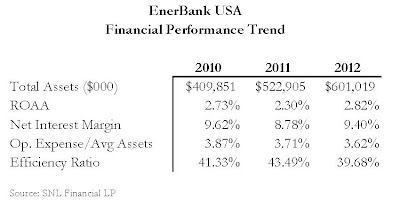 Would you like those numbers? I'm not suggesting closing down the mortgage department and boarding up the branches. Prudent risk management suggests we should have diversification in our loan portfolio and funding sources. But this fear of specialization confounds me. Why can't we be known for banking dentists and veterinarians, like Live Oak Bank in North Carolina, or serving Philly's Main Line affluent, like Bryn Mawr Trust? And yes, why can't we learn from the 31 active Industrial Banks from Utah?

I think there is something to be learned. What do you think?

Banker Quotes: As Told To Me v5

I learn a lot from bankers and industry experts as I visit their offices, speak to them on the phone or at industry events. Occasionally they will offer an insight that I think my Twitter followers would find interesting. Since I estimate my Twitter community only reads about 10% of their tweet stream, and so many of my blog readers do not follow Twitter, below are selected quotes that I tweeted since version 4.

Note that if the quotes exceeded 140 characters, I would have abbreviated or substituted some words to make them fit. So if you are a CPA and want to count, a few of the quotes may exceed the 140 here, but not on Twitter. I quote people anonymously to protect the innocent.

1. Bank CFO to me: Whistling by the graveyard is the best of bad choices when looking at our parked deposits.

In the third quarter 2008, the average money market account had a balance of $72,823. Scroll forward to 3Q 2012, the average balance ballooned to $112,060. Do you think your duration assumptions should change?

2. Bank consultant: If the house is on fire, don't expect credit for finishing the basement. 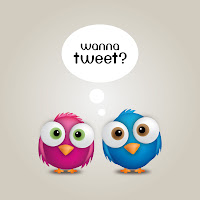 Regulators will focus on the fire. Your carpeting job in the basement doesn't matter.

And auto loans performed well during the most recent recession. I suppose the saying is true: You can sleep in your car but you can't drive your house.

4. Bank CEO to me: A great relationship might get you 25bps on a loan. Covenants can get you another 25-50.

Skeptical. I would like to see this in action. So those with great relationships don't discount the price to "get the deal done?"

5. Bank institutional investor to me: "For banks to be relevant they should have 35% of revenue in fee income." Me: Profitable fee income?

Your level of fee income only matters if something drops to the bottom line. For many, the only thing left for the bank is the risk.

6. Bank CEO: We're feeling some [economic] recovery but why does it have to be so painfully slow?

It took US Bank two years to evict Kiss' Ace Frehley from his house after he stopped making payments and paying taxes.

8. Bank CEO: We need to fix our processes because I can't get the egg through the snake fast enough.

At a time of low loan demand, perhaps a process review is in order.

9. Bank consultant: If a regulator doesn't like your bank, there's always something they can find in Compliance. #tyranny

10. Retail Banking Exec: Until today retail deposit products were driven by the land of the free.

11. Bank director: re-imagining the branch network will include complexity and drudgery. But it will be worth it.

I was surprised to hear this from a director. Usually, by change, bank director's mean switching to the tuna salad instead of the chicken salad.

12. Bank Chairman: In my business, getting something done quickly meant by Friday. In banking, it's in two or three years.

One reason: There are roadblocks to asking permission and penalties for begging forgiveness. But let's not forget the Sergeant's that run our bank that embrace change like my daughters embrace my opinion.

13. Bank CEO: We're doing so well because our competition is so bad. #classic

And many of you reading this are this bank's competition.

14. Bank Chief Risk Officer: Our biggest risk is regulatory grind. It is constantly wearing down our staff.

Let's not allow the final arbiter of our strategy to be the "no" person in compliance.

What are you hearing out there?

Posted by Jeff Marsico at 6:28 PM No comments:

Uncle Sam: Get out of my house!

Freddie Mac posted a $4.5 billion fourth quarter profit. Fannie Mae did not yet report but made $1.8 billion in the third quarter. So our Government Sponsored Enterprises (GSEs) are minting over $25 billion to their owners... Uncle Sam. Folks, revenue to the government is like crack. Congress won't be taking up GSE reform anytime soon.

This poses a challenge for bankers. Twenty five percent of our loans are in residential mortgages (see chart). Eighty percent of mortgage originations currently pass through the GSEs. In other words, Uncle Sam owns the mortgage market and dictates its terms. Ever heard of a QM (qualified mortgage)? I would not call myself a libertarian because there are legitimate reasons for the government to participate in free markets. When the payoff is long term, such as drug research, comes to mind. 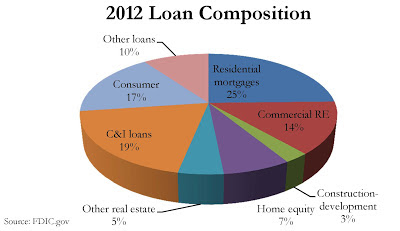 But residential mortgages are not the same as the cure for pleuropulmonary blastoma. The market is fairly mature. FHFA (regulator for the GSEs) Director Edward DeMarco recognizes this and is working on developing a sustainable mortgage trading platform that can eventually be in private hands. Mortgages can be done by banks, credit unions, and the shadow banking system, without Uncle Sam's assistance.

If you believe what I say is true, and perhaps our Congress finds religion to make it so, there will be changes. Some of these changes will not benefit consumers in the short term. Mainly, we are likely to see a decline in the number of 30-year mortgages.

Now, I have a 30-year mortgage. Who wouldn't with rates so low? But, truth be told, there is no way a financial institution (FI) can find 30-year funding. I understand that the "average" mortgage loan lasts seven or eight years because people move. And that there is some cash flow to the FI because the loan amortizes. But there is no seven year funding FIs can tap either.

If the mortgage market became more private, the 5-1 or 7-1 ARM would assume a higher perch. This is more palatable to FI risk managers and would allow for them to put more of these loans on their books. If booking the loans, they don't have to worry about the tail risk and all of the other bad things that can happen as a result of government intervention and QMs.

I don't believe 30-year mortgages would go away. Their would still be a secondary market with private investors to purchase pools of mortgages. Additionally, FIs may determine to book some 30-years, and to accept the interest rate risk or hedge it. But the 30-year will begin to be priced to market, instead of artificially low because of all the government interference.

The end result will be a resurgence of local FIs willing to lend and book their customers residential mortgages. There will be more choices for borrowers. And yes, borrowers will more frequently have to accept interest rate resets sooner than 30 years out.

How do you think FIs can more fully participate in residential mortgage lending?

Posted by Jeff Marsico at 11:17 AM No comments:

The Tax Man Cometh: Do You Pay "Your Fair Share"?

In the midst of all the clamor in Washington over what is our "fair share" of paying taxes, I wondered how much my family contributed to the bureaucratic tax machine at the Federal, State, and local level.

Yes, it's tax season again and this year I am determined to do my own taxes. But that decision didn't come without the requisite angst. Taxes are complicated, and I will be at the mercy of a piece of software to get it right.

For the last decade I had a professional prepare my taxes in every year except one. The one I did myself: a day out of my life I'll never get back. But I received two "mail audits" the last two years, so this year I'm rolling the dice on my own again.

Without further ado and also without disclosing too much personal information, here is what the Marsico's gave up to support... whatever: 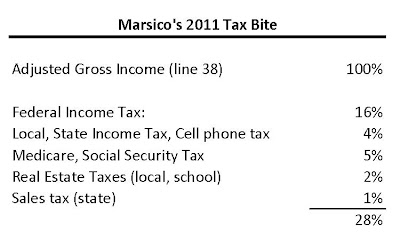 Twenty-eight percent of what we earned paid some form of tax or another. What that doesn't include are the taxes paid by corporations that are passed on to us through the price of goods sold. We would be foolish to think that we didn't pay for GE's tax through the cost of the light bulb.

I'm not sure if this is high or not. But if you paid me nothing through mid-April, and remitted my entire paycheck to one government entity or the other, it would hurt... and be a depressing three and a half months. In that context, supporting our government programs does cause pain. Tax dollars paid by the Marsico's eclipsed our mortgage by 5x. 5 TIMES!

This is a banking blog, so I won't go on about taxes. But the thought that some people need to contribute more is baloney. And the complexity to understand exactly how much we owe and pay in taxes is equally baloney.

Posted by Jeff Marsico at 10:31 AM No comments: