Conference Watch: How To Be Successful in a Changing Industry

How many consultants go to banking conferences and attend the sessions? At least one!

I may have been accused of being arrogant once or twice, which inspires me to continuously elevate my abilities so the perception of arrogance is seen for what it is; confidence. And the only ones accusing me of arrogance are those that elevate themselves by sniping at others.

So was the case at the ABA Conference for Community Bankers. A well-run operation where I get to know the folks at ABA better, meetup with clients and "conference buddies" (other service providers that we see at many other conferences), and learn. Because most conference presenters, although obviously trying to expand their client base, deliver deep knowledge and great insights.

If they're offering, I'm accepting.

The flip side to service providers delivering knowledge, are paid speakers for hire. At the #ABACCB, one paid speaker was Ben Sherwood, former head of ABC News.

A little of Ben's bio for background: a Rhodes Scholar, he came up the ranks at ABC News and NBC News in the late 80's and 90's. He was named executive producer of ABC's "Good Morning America" in 2004. He left the show in 2006 but returned as president of ABC News in 2010. On his watch, "GMA" rose in the ratings to top its a.m. arch rival "Today" in 2012 for the first time in 16 years. Sherwood attributed the flip to "Today" foibles and "GMA" trying new things, such as five hosts, to change the dynamic. He headed Disney/ABC TV Group from 2015-18, when he left the network.

In his talk, he spoke of four keys to being successful in a changing industry. I think it's obvious that TV has been changing at a rapid pace. Faster than banking, I dare say. So I was interested in what he had to say. Below are the four keys and my opinions on how they apply to banking.

How To Be Successful in a Changing Industry

1.  Fighting a stronger opponent by unconventional means yields victory two-thirds of the time.

Ben gave some facts on this, although I can't recall them. I'm not a huge fan of comparing military endeavors to business. But there are lessons here. Think how Afghanistan frustrated the Soviets. And how the North Vietnamese overcame us. Both were victories for a hugely inferior force. This is why Sun Tzu's "Art of War" is such a digestible business book. According to him,


"If your enemy is secure at all points, be prepared for him. If he is in superior strength, evade him. If your opponent is temperamental, seek to irritate him. Pretend to be weak, that he may grow arrogant. If he is taking his ease, give him no rest. If his forces are united, separate them. If sovereign and subject are in accord, put division between them. Attack him where he is unprepared, appear where you are not expected."

I remember at this same conference a few years ago, Marc Randolph, co-founder of Netflix, said the idea to waive late fees which set the wheels in motion to unseat Blockbuster was one of several they tried to grow subscribers. And he didn't even think it was a good idea. But they were trying something, anything! And boom! Look at Netflix now. All because of a weird idea that would reduce Netflix revenues in the short term. Yet they were willing to try it to rule the world. And rule the world they did. Ask Blockbuster.

Banks have cultural challenges to implementing this success strategy. Failure is a dirty word. There will be recriminations, heads rolling, bonuses slashed. Sure, you can implement ideas that fail, but don't miss your budget. Better to make slight modifications to business as usual, right? Think about your culture. Is it conducive to implementing several ideas, with most of them failing?


"Failure is success in progress."

Nothing like a nod to Disney in a former Disney executive's speech. But as my "conference buddy" Tim Pannell from Financial Marketing Solutions points out, what company do you think of when somebody says "magic" or "magical"? What a word to associate with your brand! At any rate, I digress. Back to banking.

I believe in strategic alignment. If your vision is to "elevate our customers' self worth by increasing their net worth", then everything you do should be designed to deliver that "magic". Think in practical terms. Does your branch manager know how to use your personal financial management tool and sit down with a retail customer to set it up and make recommendations? Will your commercial lender help the local bike shop obtain inventory financing even though it might be "small potatoes"? Yet I hear some of the "help customers" platitudes like the vision above with little "hands dirty" work behind it.

Believe in your magic, and deliver on it. It requires work, both in talent management and cultural change.

Don't suffer from analysis paralysis. That drives back to your culture, and fear of failure. I'm not saying don't make informed decisions, but more data has declining value and is more difficult to gather. Would your bank ever make the decision to forego late fees, a significant revenue source for Netflix, in that situation?

Do you have friends that you view as do'ers? May not be the sharpest, or the most well-read. They just do. We need more of them in our banks. Because in a changing industry, we need to be bent toward action.

Those are Ben Sherwood's four approaches to be successful in a changing industry.

Take an inventory of your bank and culture. How do you stack up?

Posted by Jeff Marsico at 12:55 PM No comments:

Not a Session at Acquire or Be Acquired: Culture

I attended Bank Director's Acquire or Be Acquired conference two weeks ago. The buzzword of the show: Culture.

When Raphael Reznek, CIO of Mascoma Bank, spoke about the biggest challenge to launch online account opening: "our internal culture". When Mike Butler, CEO of Radius Bank, spoke of technology experimentation and implementation: "you have to change the culture in the company". And in a session titled Advice and Counsel for First Time Acquirers, Bob Monroe of Stinson LLP said: "Being able to fit your culture in with the seller's culture is extremely important, because you'll have a flat tire running down the road." 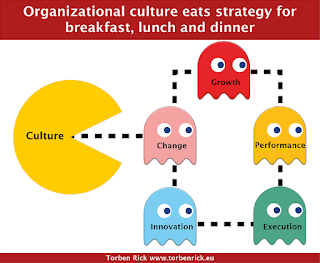 If I asked you to write your definition of culture in the comments, would yours match others? Because when I hear the term, I don't know what people are talking about.

I do recognize that whoever talks of culture, generally thinks their culture is superior to yours. Except Raphael, who at least was reflective about it. I should note that Raphael has not been at his bank very long, and he is not from the banking industry. So it was easier for him to objectively assess the weaknesses in his bank's culture and address them. It is not lost on me that their CEO is also from outside of the industry and relatively new to the bank.

Mike Butler of Radius, although a lifelong banker, came from outside of the region and implemented a business model and cultural change at his bank with new management and a "fast fail" innovation culture. Mike is from Cleveland. And surprisingly a Yankees fan. In Boston. #resilience

1.  The customary beliefs, social forms, and material traits of a racial, religious, or social group. Also, the characteristic features of everyday existence (such as diversions or a way of life) shared by people in a place or time. Such as popular culture. Or Southern culture.

2. The set of shared attitudes, values, goals, and practices that characterizes an institution or organization. Such as a corporate culture focused on the bottom line.

3.  The set of values, conventions, or social practices associated with a particular field, activity, or societal characteristic. Such as studying the effect of computers on print culture, or changing the culture of materialism over time...

4.  The integrated pattern of human knowledge, belief, and behavior that depends upon the capacity for learning and transmitting knowledge to succeeding generations.

Did you know that "Culture" was Merriam-Webster's 2014 word of the year? Because it was the most searched for term. Meaning so many of you, like me, had to look it up because we had no idea what people meant when they talked culture. In this 2014 New Yorker piece, editor Joshua Rothman wrote: "institutions that drone on about their 'culture of transparency' or 'culture of accountability' often have neither."

Look no further than Wells Fargo. Their "toxic sales culture" started with Norwest, the actual buyer of Wells Fargo even though they adopted the iconic name when they executed their "merger of equals" in 1998. I have a lot of air quotes in this post.

In this 2000 CNN Money piece, which I'm confident long-standing Wells execs would wish you didn't click on, Wells is said to have a "flourishing and decidedly 'functional' corporate culture". Driven by Norwest's and the resulting Wells' CEO Dick Kovacevich, who was "obsessed with cross-selling". At the time of the article, Wells averaged 3.4 products per household, and Kovacevich wanted to drive it to eight.

Culture, as I would define it, are the unwritten boundaries that your bank operates under that drives decision making, even when executives or supervisors are not the ones deciding. Meaning that when a branch manager, or a teller, makes a judgment decision, they do so in the context of your bank's culture.

I think your aspirational culture can be written. And we often see this in strategic plan values statements. But a written description of the culture you are trying to create is meaningless if your leaders don't consistently practice it, hold people (including themselves) accountable to it, and align policies, procedures, and incentives to be consistent with it. Having daily coaching sessions on products sold would be inconsistent with a culture of doing what's right for the customer, right? I'm not smart enough to be the only person that would recognize this.

In kicking off strategy sessions, my firm reviews some inconsistencies we often see between bank practices and strategy. Below is one of my favorite slides. 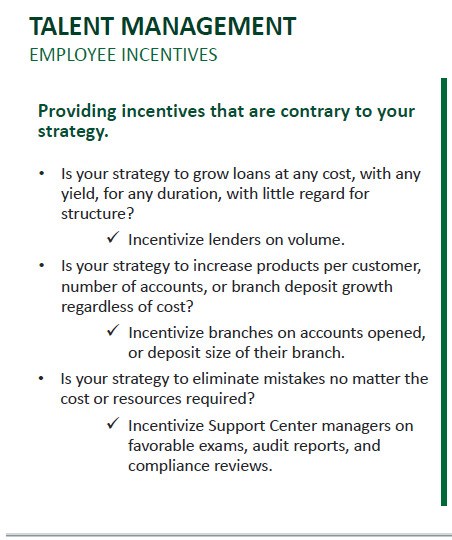 In 2015 I wrote a post about creating a positive accountability culture. So I am guilty of throwing the term out there. I have never heard a bank state or write that they wanted a culture where employees hated coming to work, or cringed when their boss called them into their office. Yet so often when the boss gives employees feedback, it's negative. In the Navy, we said "one awe sh*t wipes out ten atta boys." That is how a spoken or written cultural aspiration is disconnected from everyday practice.

Psychology weighs in on negative feedback. The Positive Coaching Alliance taught me that in order to fill the emotional tank of players, you should provide at least five positive feedback interactions to one negative feedback to get maximum performance. They called it the magic ratio.

I grew up in an environment where that ratio was upside down. And I witness it often in banking.

Note that the above slide is meant to highlight what not to do. And, perhaps, with my newfound appreciation for the term "culture", I should change the subheading to Providing Incentives That Are Contrary to Your Culture.

Because your aspirational culture must transcend words. Or it will never be attained.


What is your definition of culture?

Posted by Jeff Marsico at 10:50 AM No comments: