Top 5 Total Return to Shareholders: #4 Bank of the Ozarks

I was recently moderating a strategic planning discussion with a multi-billion dollar in assets financial institution. During the discussion, the President of one of the bank's most profitable divisions opined that less than $10 billion in assets was the "dead zone". They had to grow to survive.
I challenged the thinking. But he held firm that the regulatory environment, changing customer preferences, and the pace and expense of technology were driving the market towards bigger is better. In that, I thought, he has a point.
But I'm always looking for support. This blog has dug deep into the numbers to support the notion that bigger is better. I spoke of the best performing FIs in ROA (see link here), and how growth impacted expense and efficiency ratios (see link here). Neither supported this regional president's opinion.
This time, I searched for the top five best performing FIs by total return to shareholders over the past five years. After all, what is the point of becoming big if you cannot deliver value to shareholders? I used two filters: the FI had to trade over 2,000 shares per day so there is some level of efficiency in the stock (this created a larger FI bias in so doing); and the FI could not have a mutual-to-stock conversion during that period, which muddies the waters.
I will review my top five in descending order. Last post was dedicated to the #5 Bank, German American Bancorp of Jasper, Indiana (see post here). The rest of this post goes to our number 4 bank:
#4: Bank of the Ozarks, Inc. (Nasdaq: OZRK) of Little Rock, Arkansas


Over a 100-year banking history, Bank of the Ozarks expanded from its headquarters in Little Rock, Arkansas, to more than 100 locations throughout the Southeast and is consistently ranked among the top performing banks in America (see chart). 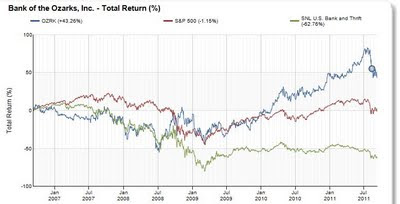 Bank of the Ozarks began in 1903 as a small community bank in Jasper, Arkansas, and by 1937, included an additional bank in Ozark, Arkansas. In 1979, George Gleason, a 25-year-old attorney, purchased controlling interest and assumed active management of the bank as Chairman of the Board and Chief Executive Officer. At the time, the bank had a couple dozen employees and total assets of $28 million.
What is interesting about the success of Bank of the Ozarks and its CEO is the fact that he wasn't the "experienced banker" regulators almost insist upon when approving the appointment of bank leadership. There are plenty of sad stories of bank demise at the hands of experienced bankers. Bank of the Ozarks and their regulators were not so myopic in their view. If our industry is to change, then who should be change agents?
In 1994, with a total of five banking offices in rural Arkansas markets, Bank of the Ozarks launched an aggressive growth strategy to expand the number of banking offices and product and service offerings. Collectively, the management team built an Arkansas franchise rivaling the largest banks in the state. The company moved its headquarters to Little Rock in 1995. The company held its initial public offering of stock in 1997. Since that time, the company has grown to more than 100 locations throughout Arkansas, Texas, Georgia, North Carolina, South Carolina, Alabama and Florida.
How did they grow so quickly? They acquired seven failed institutions in Georgia, Florida, and South Carolina from the FDIC, adding over $2 billion of acquired assets since March 2010. Such aggressive growth has led to positive operating leverage as net income and EPS has grown faster than assets (see table from their investor presentation).

Bank of the Ozarks has historically been a very good performer as they grew and prior to their recent FDIC deal binge. Their ROA in 2006 when their assets were $2.5 billion was 1.24%. Aided by the FDIC transactions and as a result of disciplined execution of those deals and the accounting of those transactions, OZRK is now a $4.0 billion bank with a 3.60% ROA year to date.
The eye-popping ROA is partially a result of the increased net interest margin, presently 5.67%, due to the accounting of the acquired loans from the FDIC. This margin will drop off as the discounted loans accrete, but if past is prologue OZRK will be well positioned to continue its historic superior performance.
So to summarize, Bank of the Ozarks Inc. achieved superior financial performance by embracing a young, forward looking CEO that clearly has a bent for successful execution. FDIC assisted transactions doubled the size of the institution, and the challenge for the next five years is how well the management team can run a much larger, and geographically sprawling franchise.
Congratulations to Bank of the Ozarks. They rank #4 in total return to shareholders over the past five years. So far, our list is:

Note: I make no investment recommendations in my blog. Please do not claim to invest in any security based on what you read here. You should make your own decisions in that regard. My wife won't let me buy bank stocks without her permission, so why would you buy based on what I write?
Posted by Jeff Marsico at 11:47 AM