Today I had a Twitter conversation about how the Durbin Amendment turned out to be a boon for retailers and a bust for financial institutions and consumers. Senator Dick Durbin from Illinois sponsored the amendment to the Dodd-Frank Act, decrying the unfairness of the debit interchange fees charged by financial institutions to retailers and how it inflated costs to consumers.

The consequences of the amendment are becoming clear; 1) lost revenue to all financial institutions, not just the largest, 2) Increased other fees by financial institutions charged to consumers to make up for the loss, or the decline in "free checking", and 3) no price reductions at the register for consumers. Dick Durbin took to the Senate floor to castigate Bank of America for trying to bridge the revenue gap by charging debit card fees. 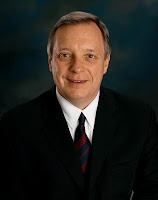 If Senator Durbin and his staff had a Twitter debate about framing the amendment, here is how I imagine it would have went...

@sendurbin Alright, we gotta do something to get my name on Dodd-Frank. Can't have that weasel from Mass. or the has-been from CT getting all the PR.

@suckupstaffer You are right Sir! Your name somewhere on that bill would be huge!

@lifelongstaffer The perception is that banks are evil. Let's play off of that.

@lifelongstaffer Well, we could scour bank income statements and talk to some lobbyists to see where banks make money, and attack there.

@newstaffer Wait. Isn't the bill supposed to stop the abuses in mortgage originations, packaging, and selling by large banks and mortgage brokers?

@suckupstaffer Pipe down @newstaffer, I think the Senator is about to tweet.

@sendurbin Where do banks make money? Hold on, I think I remember Mike Duke of @walmart whining to me about debit cards at a $500/plate fundraiser. Give him a call.

@lifelongstaffer @walmart is a big contributor. So if Dukey has an idea, we can pummel banks, get our name on the bill, and throw a bone to a patron. Win-win-win.

@suckupstaffer Mr. Duke suggests we commission a study in the bill with the ultimate goal of reducing what banks charge on debit card transactions.

@sendurbin That sounds like a great idea. We can call it the Durbin Amendment!

@suckupstaffer You're a genius, sir!

@lifelongstaffer We could spin it that we are reducing fees for consumers. We can exempt small banks so we don't look like big, bad government.

@newstaffer But if we reduce interchange fees for big banks, and try to exempt small ones, how would that work?

@lifelongstaffer It doesn't matter newbie. It only matters that it looks like we're helping consumers at the expense of too big to fail banks. Could be huge!

@lifelongstaffer And the windfall to @walmart will keep our campaign coffers full for the foreseeable future!

@newstaffer Wait, isn't the amendment supposed to reduce prices at the register for the consumers, not inflate @walmart's profits?

@sendurbin *laughs* Son, if that's the way it goes down and the banks charge more fees, I'll take to the Senate floor as the champion of the consumer!

@newstaffer But the likely result is more fees to the consumer as banks try to make up for decline in interchange fees. We may win in perception, but lose in consequences.

@lifelongstaffer @newstaffer Son, you have a lot to learn about politics.

If you are a Senator Durbin staffer, please forward your cease and desist letter to me via e-mail. I would be happy to post it here, take down this post, for fear of having the full force of the rather sizable federal government coming after me.