More Random Stuff About Me

Last year, a tweep of mine, Ken Mueller (@kmueller62), posted an interesting bio-post titled "Random Stuff You Should Know About Me" on his Inkling Media blog. I saw his reference to it on Twitter, I read it, I enjoyed it, so I decided to copy it... with Ken's blessing of course. But there is more to me than what can be documented in that short blog post, so I thought on the day prior to Mother's Day, I should open up my proverbial tent about my upbringing and my Mom.

1. Racism Cascades Through Generations: My grandfather, an Irishman whose ancestors came over during the Potato Famine, told my mother not to marry a Dago... a widely used insult to Italian-Americans. But she did anyway, and my grand father ended up loving his son-in-law dearly.

2. Life is Hard: My father died in 1972 from Hodgkin's Disease, a form of lymphoma. My family was on the lower rungs of the socio-economic ladder at his death, and he was the bread winner, leaving my mother with three boys, ages 8, 6, and 3 and little means to support us. 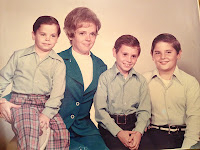 3. It Takes a Village: I believe this to be true. Not the way it is portrayed in today's society, where few take responsibility for their children due to bad breaks. But my Mom, as quarterback to our upbringing, used the men in her life to provide fine examples to emulate. To name a few: My grandfather, my uncles Joe and Bob, my baseball coaches Mr. Ross and Fritch, parents of friends, and my mother's eventual husband when she remarried 11 years later, Jack. In addition to our father, my brothers and I probably exhibit a combination of traits from these fine men.

4. Life is Not All Sunshine and Rainbows. My mother's life during those years following my father's death is testament to this. And my brothers and I were not the easiest to raise. But because my Mom never gave up, always pressed forward, doing the best she could, we turned out just fine.

During times when the traditional role of mother is frowned upon as a thing of the past, we should recognize the role mother's outside of the kleig lights of the corporate world, politics, and entertainment play in shaping lives.

Here's to you Mom. Thanks for being you.