This week, a US District Judge issued a snarky rebuke of the Federal Reserve's 24 cents per debit card transaction cap, sometimes known in the common sense world as price fixing. Judge Richard Leon opined that a seven to twelve cent cap would be more in line with Dodd-Frank's Durbin Amendment.

How do I feel about the Durbin Amendment in general and how it likely came about can be discerned from a previous post. But fundamental to the Amendment, and Judge Leon's ruling, is a misunderstanding of how banks make money.

Checking accounts are not cheap to originate and maintain. Banks expend a tremendous amount of energy wrestling what they perceive as profitable customers from other financial institutions. Additionally, once they find a willing customer, they must comply with a myriad of laws and regulations to prevent fraud, money laundering, fairness (whatever that means), or any other potential financial crime our government deems worthy of bank policing.

According to my firm's profitability peer group database, it costs financial institutions, on average, $420 annually to originate and maintain a retail, non-interest bearing checking account. How do banks cover this cost?

Deposit fees have been on the decline for some time now (see chart). Part is because of changes to regulation, including Dodd-Frank and the dreaded Durbin Amendment. But some is also customer behavior modification. Although the overwhelming customer response to automatic overdraft coverage was positive (customers preferred their checks to be covered rather than bounced), the fees served the additional purpose of changing customer behavior. 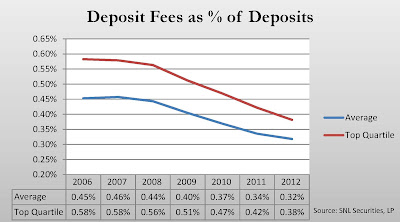 It should be noted that the 13 basis point decline in deposit fees equates to $2.2 million in annual revenue to the average financial institution ($1.7 billion in deposits, on average). How does a bank make that up? If they did it on personnel cuts, the average bank would have to reduce staff by 44 employees. But reality lies somewhere in a combination of cost savings, revenue enhancements, and reduced profits.

My point to Messrs. Chris Dodd, Barney Frank, Dick Durbin,and Richard Leon is you don't know squat about how businesses make money. Why don't you analyze a McDonald's value meal, where all the margin is made on the Coke. Price fix the Coke, and the price of the burger or fries will go up. So be it in the checking account. Think about that the next time in the drive thru buddy.

Any thoughts on Judge Leon's genius comment that the fixed price on a debit interchange fee should be seven to twelve cents?