Ever test the theory that acquiring banks is good? I did.

Every strategic planning retreat has its own flavor. This one particular retreat included a parade of investment bankers conveying the virtues of deal making while the audience of senior bank executives and board members nodded their heads in unison and solidarity.

One question that was unasked was whether it is better to seek acquisitions or go it alone. The conventional wisdom being that doing deals is better than not doing deals. I didn't know the answer, and figured asking an investment banker the question would be like asking a Beverly Hills plastic surgeon if it was better to do a little nip-and-tuck or let nature have its way. (Disclosure: I am also an investment banker, but don't like to admit it at cocktail parties. I am not a plastic surgeon.)

First I had to create some criteria to control for some variables that impact total return and financial performance greatly, such as bank size and asset quality. So I chose publicly traded financial institutions between $1 billion and $20 billion in total assets, with non-performing assets to assets of less than 2%.

Their Return on Average Assets and Average Equity performance, at the average, were as follows from 2011 to present. 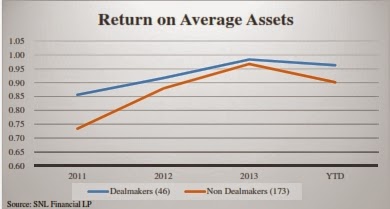 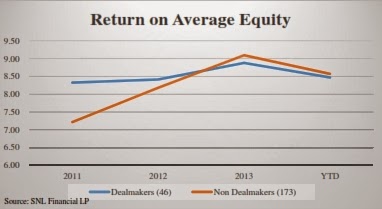 And what about three-year total return? Deal makers delivered 73.97% to their shareholders. Non deal makers did better... 75.56% on average.

Does your FI pursue acquisitions? If so, have you tested the conventional wisdom that doing deals is better than going it alone?