Me to a community banker: Why don't you offer more options than real estate secured lending to help fund early stage businesses? Banker: Because that's not community banking.

I've been in this business over 20 years and still don't know the definition of community banking.

I've got news for you. If General Bank is what we are offering, then we don't need 6,000 of us roaming the countryside. Sure, when physical locations in every town was critical to be the community bank within that town, and state and federal laws limited branching and therefore competition, then we could make a go of it with the 15,000 banks and thrifts we had in 1990.

Since this is no longer the case, we have to rethink the General Bank business model. The decline from 15,000 to 6,000 tells me we haven't come up with an answer to "why bank with us?".

In comes the niche bank, that tends to have the answer for a particular segment.

One such bank is EnerBank USA, owned by Michigan utility CMS Energy. This bank has been in the news recently, as its CEO, Louise Kelly, was featured in American Banker's recent 25 Most Powerful Women in Finance issue. Interestingly, Kelly started what would end up being EnerBank at Baltimore's First National Bank of Maryland (now M&T Bank), a former employer of mine in the mid 1990's. First National divested the unit because it didn't fit their definition of "community banking". Ironically, First National also divested my unit (Hopper Soliday & Co.), which is the pre-cursor to our current community bank consulting firm, The Kafafian Group, Inc. So we were both castaways.

Look what she has done since!

EnerBank has portals on their website for their contractors and sponsors, as well as retail borrowers. The bank is funded almost 100% with brokered CDs. You read it right: 100%.

Hmm, you might be thinking: Unsecured home improvement lending, funded by volatile time deposits. Seems risky. I would agree. But EnerBank represents about 5% of CMS's earnings, so regulators may find comfort that EnerBank's holding company, unlike most bank holding companies, has significant wherewithal to be a source of strength for the bank.

How has EnerBank done since it opened its doors in 2002? The first chart shows its growth trajectory over the past 10 years. 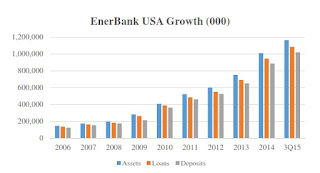 I know plenty of banks with 100 year histories that are nowhere near this bank's size. So if your bank wants to implement a growth strategy, would you be satisfied achieving EnerBank's results?

What about profits, you say? Well the accompanying two charts show the bank's ROA and ROE trend over the past ten years compared to an industry index. It is important to note that this includes the 2007-08 financial crisis where many banks suffered through poor credits and incurred losses. EnerBank did not, although they do unsecured lending. 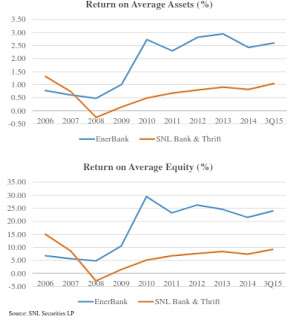 Let me be clear, I am not proposing that 6,000 community banks select a niche that drives 100% of the loan portfolio that is funded 100% with hot money. It does not seem like prudent risk management to do so. EnerBank is likely given a pass by regulators because of its relative size compared to the parent, and therefore the ability for the parent to absorb losses, should the bank incur them. Which they have not, even through the worst recession since the Great Depression. This tells me that they are very good at their chosen niche.

But wouldn't it also be prudent to develop a business plan that delivers the returns charted above? I frequently hear community bankers discuss delivering returns to shareholders. Perhaps being known for a few things would distinguish your bank from the thousands of others that continue to do fundamentally the same thing. Because the numbers indicate that General Bank is a failing strategy.

What are your thoughts on niche banking?