Board Composition: What Does the Best Bank Board Look Like?

In April 2016, Delaware Place Bank in Chicago was placed under a Consent Order (CO). One article within the order read as follows:

This is a common article and my firm performs several of these annually. The CO went on to say:

"As of the effective date of this ORDER, the board of directors shall increase its participation in the affairs of the Bank, assuming full responsibility for the approval of sound policies and objectives and for the supervision of all of the Bank’s activities, consistent with the role and expertise commonly expected for directors of banks of comparable size."

Will it? Is there evidence that proves it is so?

What makes an effective banking board? Is there one recipe?

We are often asked this question, either formally (through a Management Study or Board evaluation engagement) or informally, And the answer is, it depends.

It depends on the bank's strategy, geography, risk parameters, and personalities of existing board members. I have seen banks with former regulators on the board fail, and banks with farmers on their board thrive. I do not think there is one answer for all.

To further my point, I evaluated publicly traded, SEC registered banking companies between $500 million to $3 billion in total assets. I searched for the best, and not so much, ROE banks based on their five-year average ROEs. I excluded banks that had negative ROEs, recently converted during that five years from the mutual form (which elevates their "E"), or had standard deviations greater than 4 from their five-year ROE. In other words, they were consistently good, or consistently bad.

Then I reviewed their board composition. The top six results are as follows. 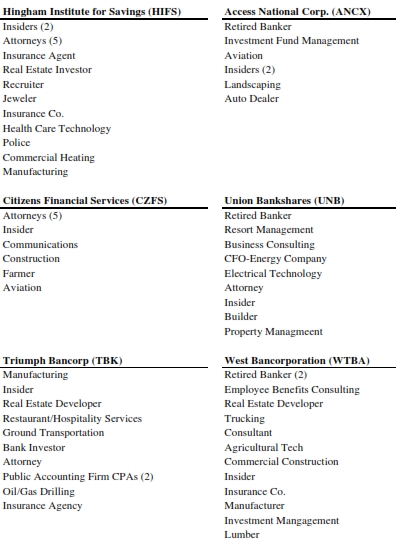 How does this differ from the bottom six? See their board composition below. 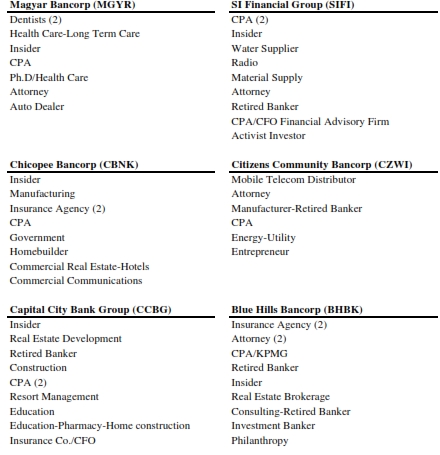 The prize for most board billable hours goes to Robert Gaughen Jr., and Randy Black, CEOs of Hingham Institute for Savings and Citizens Financial Services, respectively, for having the most attorneys on their board. Perhaps the answer is not only have an attorney on the board, but lots of them.

There were no former regulators on the boards of the above banks. At least they wouldn't admit to it in their bio.

The point of this review is that there is no one answer as to what makes a good functioning board. In my experience, a board that maintains management accountability for business performance and ensures management operates within the risk guidelines established by the board and commemorated in bank policy, is a good performing board. It doesn't matter if that board includes a baker or candle stick maker.

What do you think makes a high performing bank board? 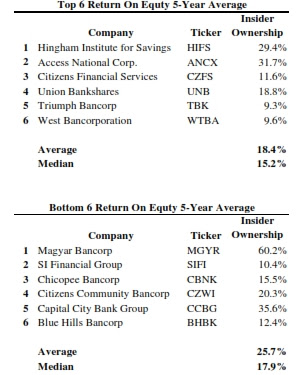