What Did a Trump Victory Do To Bank Stocks?

The S&P 500 futures plunged during November 8th's vote count when Donald Trump started pulling ahead. The nosedive gave the news media, who could hardly bare to report good news for Trump, some bad news to deliver. The market was betting a Trump win would be a disaster for equities.

But in a surprise turnaround, the next day when the dust settled and pundits were begrudgingly calling Mr. Trump President-elect, the market turned the tide. Traders were indecisive during the first 90 minutes of trading the next morning, and then came a buying spree that elevated the index to a gain of 1.43%. When things settled down, the final tally for November 9th was a 1.11% gain. So much for that Citi prognostication of an immediate 3%-5% haircut. How much do those analysts get paid?

But what happened with bank stocks? Surely there would be volatility with Trump's carping about over regulation. No industry suffered through more regulation since 2008 than the banking industry, right? And the Consumer Financial Protection Bureau, that reports to no one and has carte blanche to regulate institutions over $10 billion in assets, would surely not sit well in a Trump presidency.

Let's take a look. I analyzed the difference in stock prices of all publicly traded financial institutions that trade over 10,000 shares per day on US markets. I used October 31st as the base period, and the closing price on November 9th. Highlights can be found in the table below. 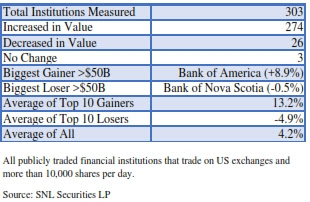 In fact, the biggest loser in the systemically important >$50B category (SIFI) was a Canadian bank. Yes, I know they don't count towards our SIFIs, but still. A little humorous that a Canadian bank would suffer a decline. They are about to receive a significant amount of our celebrities! Looking further up the list for the next worst SIFI, I find National Bank of Canada, then Bank of Montreal. I had to go all the way to Huntington Bancshares to find a US-based SIFI. And they gained 2.9% from Halloween until November 9th!

I should note that three of our clients are in the Top 10 Gainers. I'm not trying to claim causation, just putting it out there.

The average stock price gain of all US publicly traded financial institutions between Halloween and November 9th was 4.2%. There was no catastrophe. No meteoric rise. Just another day at the office.