Are Bankers At the Intersection of These Three Traits?

Jeff Weiner, CEO of LinkedIn, penned a post titled The Three Qualities of People I Most Enjoy Working With that was based on a Venn diagram (see below) he had previously posted. The diagram had 20k+ likes and comments on LinkedIn, and 2.2k retweets and favorites on Twitter. 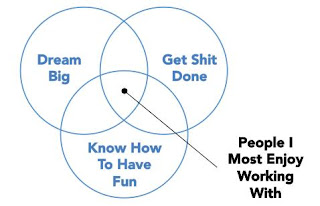 Does any bank culture produce these qualities? Does yours? There are headwinds. Banking, a slow moving tortoise of an industry until only recently, was not a big thinking industry. With all of the scrutiny, negative press, and regulatory change, I don't experience many bankers having fun, either.

What I do see at good performing financial institutions is the get sh*t done attitude. But even that is inconsistent. Impeding this culture is a "no mistakes" culture, or as we used to say in the Navy, "one aww sh*t wipes out 10 atta-boys". So whatever needs to get done goes through unnecessarily long approval chains to dilute accountability in case something goes wrong. And by wrong, I'm not talking something big, such as a regulatory order, or big losses. I'm talking about the possibility of an audit finding being enough to kill a get sh*t done culture.

A culture with all three would indeed be unique. And I'm confident there are financial institutions that have all three. I would like to hear from you about your bank, or one that you know, that has these three in their DNA.

Here are a couple of financial institutions that possess these traits.

In the fourth quarter of 2010, an investor group recapitalized a $66 million in assets financial institution, that was breaking even, and had less than $6 million in capital. The investors changed the management team, moved the headquarters, and dreamed big. Today, First Commerce Bank, in Lakewood, New Jersey, has $826 million in assets, $101 million in equity after a recent capital raise, and delivers a 1.56% ROA and a 17%+ ROE. By every financial metric this bank has been a success. The secret: Work Hard, Dream Big. My words, but not dissimilar to the words I've heard their CEO, Herb Schneider, say.

In my firm's most recent podcast, Tony Labozzetta, CEO of Sussex Bank, described how his team engineered a simultaneous turnaround, growth, and profitability story. When Tony's team was forming in the first quarter 2010, the bank had $452 million of assets, was barely making money, and over 5% of its loan portfolio was non-performing. Rather than hunker down and work through their troubles, they assigned bankers to work through them, and built a wall around them so the rest of their team could focus on that other thing... running and growing a profitable bank. Asset growth has been 12%, 15%, and 27% (year-to-date September 30th) the last three years respectively, the ROA was 0.72%, and non-performing loans to total loans was less than 1%. I'd say they got sh*t done. And they're still doing it.

Know How to Have Fun

A bank that knows how to have fun is difficult to pinpoint, although I'm confident there are some. With so many financial institutions tense about their next exam due to regulators' often times capricious interpretation of the implementation of regulations and law, how can bankers channel this tension into experimentation, technology adoption, and yes, fun. I think fun can be had. Here are a few things I think would work in creating an atmosphere ripe for employees having fun.

1. Embrace mistakes as opportunities to learn. So long as the mistakes aren't of the "bet the bank" variety.

2. Highlight and reward successes. Do so publicly, in the company newsletter, or an awards ceremony, etc. So often the positive to negative feedback ratio is way out of whack. Catch people doing something right. And train your supervisors to do the same.

3. Fire people. That's right, I'm suggesting firing people in creating a fun culture. Because nothing kills a fun culture than those sergeants in your bank that criticize far more than compliment, have zero tolerance for mistakes, and thwart efforts to move your bank forward. Get rid of them. The employees that remain will silently cheer.

4. Start at the top. CEOs and executives could smile more, lighten up a meeting, pat people on the back, say thank you, etc. Your team is more likely to have fun if most signs they see from you is that you are having fun.

Tell me, what bank culture has all three?