Bankers Bank: The Next Generation

Correspondent or bankers' bank is one of those monikers that the meaning is in the eye of the beholder. Like private banking. Or superior customer service. Whenever someone says it, I look at them with an inquisitive head tilt. Like a dog when a person talks as if the dog understands them.

I think correspondent bankers are finding their way and morphing into services that banks need. Their original purpose, as I understand it, was to use up operating, liquidity, and credit capacity in larger financial institutions to benefit nearby community banks. Need access to cash? Call the correspondent bank. Cash letter for nightly settlement, same deal. An underlying, yet important plot in It's a Wonderful Life was that Mr. Potter's bank served as a correspondent bank to the Bailey Building and Loan. He caused a liquidity crunch by not advancing Bailey credit, and offered to assume the deposits at "fifty cents on the dollar"!

Today, with the Federal Reserve, Federal Home Loan Bank, and technology that has all but eliminated paper "items", the traditional role of the correspondent bank is diminished. Not that the concept of developing scale to provide banking-related services at a lower cost than a community bank can achieve on its own is not lost. In fact, I would say it is needed now more than ever.

But they are provided by other service providers. Take my firm, that builds profit reporting models for community financial institutions based on how they are individually managed, and the products that they offer. We do this for dozens of banks. It would not be cost effective for us to do it for one bank, or even a few banks. Our investment in software and management reporting expertise would be underutilized, or the service would be too costly to deliver. The same with ALCO reporting firms. We use our scale to serve the many.

But couldn't banks use a scale-driven servicer, i.e. a correspondent bank, to provide needed services at a lower cost so community financial institutions don't see a sale as their only way to cost-effectively serve customers in a changing industry?

I think so. Let's call our little hypothetical correspondent bank Schmidlap Bankers' Bank. Here are the services I would foresee under Schmidlap's umbrella. 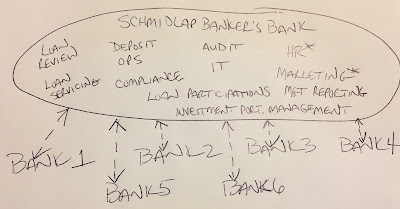 Many of the services identified above are already provided by firms, such as mine and ALCO firms in the form of Management Reporting. I know that bankers' banks currently specialize in Loan Participations, as bankers would prefer to share a credit with a service provider than a competitor, as many do now when they do bank-to-bank participations.

Loan servicing is another vendor driven service used by banks. In fact, there is a specialty bank in New Jersey, called Cenlar, that specializes in subservicing mortgages for financial institutions. When customers call with loan inquiries, they answer the phone with the originating banks' name, and live up to service standards agreed upon between the bank and the subservicer.

So many of these services exist under several vendor umbrellas, and financial institutions have demonstrated a willingness to outsource certain non-differentiating services. So why not have these performed by Schmidlap, a new-age correspondent bank?

This idea began germinating in my head when I spoke at the Kansas Bankers' Association CEO Summit a couple of years ago. At dinner that evening, I sat with the management team from a small, family-run bank. Very common in Kansas and across the Midwest. In fact, the average asset size of a Kansas-based financial institution was $99 million. The bankers described the difficulties in running a small bank in rural markets.

I suggested banding together, not in the form of a merger, but to form a service corporation to buy services, like identified in the diagram above, to reduce the cost of doing these things on their own. They were intrigued. I haven't seen one sprout up yet. But isn't it time?

Imagine the negotiating leverage with FIS, Fiserv, or Jack Henry if the contract for six or seven banks was struck by one entity? Sure, all of the banks would be on the same platform. But isn't that the way it is now? Except you all negotiate separately. That doesn't mean you can't set up your own product set, or your bank wouldn't be segregated with its own database at the data center.

And what of things like Marketing and Human Resources? Each bank should have their own professionals. But it is difficult for banks to have the level of sophistication in terms of systems, such as CRMs or HRIS, or the resources (or geography) to hire the very best professionals. Many view Marketing and HR as collateral duties of one executive or another. Both of these functions, in order for community financial institutions to thrive, must elevate their game.

For HR, provide the best talent, employee development, and compensation systems. For Marketing, financial institutions must implement more sophisticated approaches to attracting new customers, and better serve existing ones. It's no longer good enough to run an ad, order a tchotchke, or staff a booth at the trade show. Marketers must identify the most profitable customers for gold-tier service, and implement a plan for the next tier customers to turn them into gold-tier.

Those executives and systems might be more than a community financial institution can afford. But as part of Schmidlap, that level of sophistication can be yours! There could be a geographic limitation so Marketing and HR within Schmidlap could not serve two banks with, say, greater than 20% market overlap.

I've said enough! You get the point. Incoming ICBA chairman, Scott Heitkamp of ValueBank in Texas, said at the trade association's annual convention that he is concerned about the 30% decline in banks with less than $10 billion in assets since the financial crisis. He is hearing that community banks either can't afford or don't want to deal with the regulatory burden.

Can a re-invented bankers' bank inject newfound confidence into community banks, and up their game to compete over larger geographies with more sophisticated support functions?