Health Insurance: A Bank Problem Too

Bank health insurance premiums have escalated to the point of cutting back benefits. As a nation, our system is not working, whether it be Obamacare or pre-Obamacare. The cost continues to escalate.

An industry publication recently contacted me for some commentary on their "Best Banks to Work For" annual piece. Naturally, I had opinions. When I analyzed their list two years ago, I noted that the financial performance of those banks was similar to banks that didn't make the list. Greater investments in personnel and employee benefits did not result in inferior financial performance.

I also noted that the most cited benefit by employees of banks on the list was gym and health initiatives. And generous benefits was near the top, at fourth. Remember the days that employees would seek banks out for stability, fair pay, and employee benefits? Merger mania has nearly eliminated stability, and the rising cost of healthcare has led to many banks cutting back on generous benefits, removing another competitive advantage in the employee marketplace. 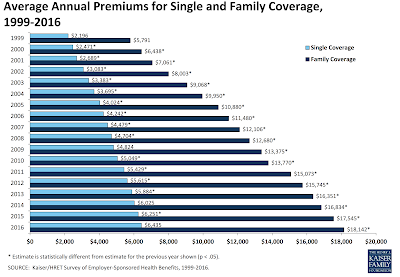 It should be noted that the data in the accompanying charts came from employers. Not premiums in the Affordable Care Act marketplaces so often cited by lawmakers. But the escalation of premiums continues to far exceed inflation and will continue to put pressure on banks' bottom line unless they prune benefits even more.

So I would like to chime in on the healthcare debate, because we can no longer rely on media outlets to provide us with the information to make informed decisions. They cover protests. And protesters are likely to be people that receive free or highly subsidized insurance. I doubt there are net payers to the health care system out there protesting that they should pony up even more for the net takers.

The media covers inflammatory political rhetoric. Like saying one proposal or another will kill people. Not fact-based debate. Too boring. As evidence, look for the oft-quoted CBO stat that one proposal will result in 20 million more uninsured people. The next sentence should say, "the vast majority of which would choose to not participate". Does the media coverage say that? There ya go.

So here are my thoughts:

Health care is a group system. If someone gets sick and consumes more than they contribute, the cost is made up through a pool of people that are paying more than their consumption. That is truth no matter if it's private insurance or government paid. But single payer, or government paid insurance where it's a continual transfer from one group to another is a bad idea. Look at the VA. True competition will come when the payer of services is the consumer of services. Look at auto insurance. We're forced to buy it, and we do so privately. Bad drivers pay more than good drivers. And the Camaro owner pays more than the Camry owner.

So the JFB health care plan would be private health insurers.

I propose there be a required minimum basic coverage that keeps families out of bankruptcy should they fall ill and encourages preventative care. Such as a high-deductible Health Savings Account (HSA) plan that has a maximum out of pocket (MOOP) per annum per family of about $10,000, adjusted for inflation. There must be language to limit political influence in this law. One of the failings of Obamacare was putting in political wish-list stuff for social engineering. Such as birth control. To keep teenagers from making babies. Sort of like mandatory parenting. The Basic Plan should be simple and protect families from bankruptcy for extraordinary medical expenses and encourage preventative care.

I like HSA plans because it puts individual skin in the game. You want to load the shopping cart with Oreos or smoke a pack a day. It will cost you much more than me. Skin in the game. Put behavior and cost of the behavior as close to the individual as possible so there is consequence. I'm an accountability type of guy.

States can have overlays to keep state control. Especially since the Federal mandate will be Basic. But regulation and enforcement of the national law would be national. Regulation of overlays can be state-based. So if California wants to jack up the prices of plans to include medical, recreational, and Cheech and Chong level marijuana use, it's on Californians. We're not going to charge Kentucky for it.

My apologies to the freedom lovers, but we must compel people to buy insurance. In 1985 we required hospitals to treat whoever came to the emergency room, regardless of their ability to pay. That is why you would have to wait so long to get your broken arm fixed. Someone checked in before you with a head cold. Remember those long wait lines in the emergency room? Free health care for those that chose not to buy health insurance. Free riders. No more. This also solves the adverse selection problem in health insurance. People that don't participate in a health insurance plan if they are healthy (i.e. net payers). Many wait until they are likely to be net takers.

Make insurance transparent through a pricing portal run by your insurance company. Insurance companies negotiate different rates for different services by provider, and by insurance plan. It is nearly impossible to make an economic decision. I remember my daughter being at the doctor and was diagnosed with hip dysplasia, a common problem for growing female athletes. The doc said he was 95% sure this was the issue. If we wanted him to be 100% sure, he would need an MRI. I asked how much that would cost. He was taken back by the question, but left the room and asked his admin staff, and they came back with somewhere in the $900 range. That would come out of my HSA. So I decided his 95% was enough. I balanced an economic and medical decision. If a third party paid for it all, I probably would have gotten the MRI. See the problem?

Under the JFB plan, there would be an app that prices out services and service providers so everyone knows the price of their decision, including the prices of local doctors.

Medicaid should be transitory. We are creating a lifelong needy class in our society. It's moving closer towards indentured servitude to the government. Which is dangerous. Check history. However, keeping with the theme of pushing things more local, states can keep ponying up for people that aren't employed, lack the basic plan, and have lots of protest time. Their choice.

Companies can compete for talent based, in part, on their additions to basic coverage. They have the option to make HSA contributions and premium contributions to the basic plan, add benefits, or all of the above. Making it easier for would-be employees to determine which insurance offering is better, and tilt the scales towards those that are more generous, and creating transparent competition for talent.