Why Did Oritani Sell For No Premium?

On June 25th, Oritani Financial Corp (ORIT) common stock closed at $16.21 per share. The next day they announced they were selling to Valley National Corp. for $16.29 per share. Virtually no premium. And less than ORIT traded one year ago. Why?

I was not part of the discussions regarding the transaction, and am not an advisor to either bank. I have no inside information to share. Only some observations and opinions.

ORIT has historically been a high performing financial institution in a highly concentrated deposit market. For the calendar first quarter 2019 they had a 1.22% ROA, which was down from 1.31% in fiscal 2018 (ORIT is on a different fiscal year). Their efficiency ratio... fuggetaboutit! Thirty six percent for the quarter ended 3/31.

So why did they receive 138% of book value, and 14x earnings when nearby (5 miles between headquarters) Stewardship Financial Corp. (SSFN) announced their sale to Columbia Financial (MHC) for 167% of book value, 17x earnings, and a whopping 77% premium. This transaction was also announced in June. ORIT is 4x the asset size of SSFN.

There are many factors that go into pricing merger transactions. Cost savings opportunities, attractiveness of markets, niches or specialties, seller's capitalization, buyers' stock valuations, etc. And in fact, ORIT was relatively highly capitalized compared to SSFN, with a leverage ratio of 12.92% versus 9.48%. That plays a role in price/book merger pricing. But ORIT consistently outperformed SSFN in financial performance. Yet received a lower valuation.

You may recall I wrote about the value of brand in a post entitled: Bank Brand Value: Calculated! And I am very familiar with financial institutions in the Mid-Atlantic. So I suspected a key factor leading to the no-premium deal between ORIT and Valley might be related to ORIT's brand value.

So I did the calculation described in the linked post (see table). 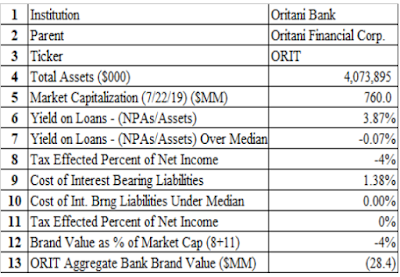 I searched for regional peers with total assets between $1 billion and $10 billion. I then filtered for loan peers that had multi-family and commercial real estate loans greater than 60%. ORIT's was 92%. These are highly competitive, transactional loans. And in the New York metropolitan area, are significantly originated by loan brokers and bid on by banks.

Even though I searched for peers with high levels of these types of loans, ORIT earned seven basis points less than peer in Yield on Loans minus NPAs/Assets, negatively impacting bank brand value (BBV).

For deposits, I searched in the same region and size as loan peers, but controlled for banks that had total time deposits as a percent of deposits greater than 30%. ORIT's was 42%. The Cost of Interest Bearing Liabilities was the same as the deposit peer group. So it did not add or subtract from BBV.

So, although I filtered for financial institutions with a similar balance sheet composition, ORIT had an inferior Yield on Loans minus NPAs/Assets, and equivalent Cost of Interest Bearing Liabilities.

Leading me to the opinion that, among other factors, ORIT received no premium because it had a negative BBV.

Why do you think the bank received no premium?