You're a top performer at your bank and an executive from a competing bank wants you on their team. You recently got a new boss, and it isn't gelling. So the offer is timely.

You check out the competing bank. Do your due diligence. You respect their executives. Their numbers look good. Heck, you've lost a few deals to them. This bank deserves serious consideration for a job switch. 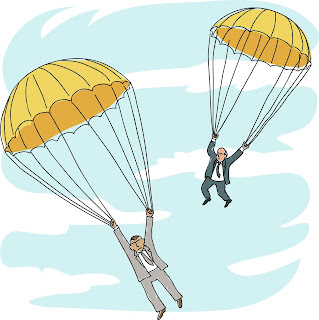 Hold on! You check their proxy statement. The CEO is 67. And he/she has a 2.99x change in control (CIC) contract. Nope. You're out. This bank's gonna sell so the CEO can pull the golden parachute rip chord. Why would they walk away with a gold watch when they can get paid for three years while sipping boat drinks in the Bahamas?

This hypothetical situation is an unintended consequence of executive CIC payments. The incentive gap between selling the bank and retiring while remaining independent is perceived as too big.

There are legitimate reasons for change in control contracts. Meridian Compensation Partners, in their 2017 Study of Executive Change in Control Arrangements list the following reasons:

Aside from making it more difficult to get top performers to come to your bank when the CEO nears retirement, there are other unintended consequences. Other executives that may be retired in place (RIP) may hang on a little too long waiting for a buyer to come knocking and trigger their CIC payments. They are less likely to be making difficult decisions that will cause disruption yet might move your bank forward and position the bank for long-term success during this waiting period.

Middle managers and high potential employees can read proxy statements too. Imagine the regional branch manager that wants to propose a change in hiring practices and development plans to turn branches into high performing sales and advisory centers. It will be difficult, but it is what customers are demanding. Should we do it? Nah, CEO is about to pull the chord. Multiply that perception several times over, and you have a bank that is losing pace with the market, making a sale a fait accompli.

Shareholders celebrate the CEO's birthday too. I invest in bank stocks and have looked at a CEOs age on more than one occasion as a decision-point. This could artificially increase the valuation, making a sale more likely because the bank would have to earn its way into an inflated valuation. And shareholders may have bought in with the anticipation of a sale.

Development plans that help your high potential employees follow an executive track are shelved because of budget pressures. I am generally a cynic but most CEOs I know act in the very best interest of their bank. But what if, in the back of their mind where we rarely visit, they know that if they keep deferring the long and purposeful journey of developing multiple homegrown executives capable of becoming the next CEO, the board will opt to sell because there are little to no succession options. Under Jack Welsh, GE always had two or three people ready to go. Big company, I realize, but something to think about.

What should you do about it? I asked a couple of executive recruiters and they didn't help me out. So I came up with one on my own. Unique, yes. A little out there, yes. Consistent with building a long and enduring business model, I believe yes.

Offer a Retirement Stock Plan (RSP) to ALL employees. Before you stop reading, let me describe it and run the numbers. One reason that institutional shareholders complain about CIC arrangements is because they put money in an executives pocket at the expense of shareholders. When a bank sells, the buyer assesses its value, then subtracts deal expenses. And a big deal expense is executive contracts.

But what if there was an incentive to stay and build the bank for the long-term, and retire? And instead of it only being available to executives, make it available to all employees that have been with you a minimum amount of years and retires.

This will put a premium on your talent management processes. Much like GE that shed 10% of its workforce each year using employee evaluations as the means to identify the 10%, a bank that implements an RSP must motivate high potential and otherwise good employees to stay, while having a process to improve or remove low performers so they don't hang on to get their RSP.

It all comes down to a spreadsheet. Suppose Schmidlap National Bank, a $1.5 billion in asset bank, implements an RSP that pays 50% of a retiring employee's salary in Schmidlap stock if they retire after a certain age and have served between five and ten years at the bank. It would pay 100% of salary if they are there more than 10 years. Schmidlap can restrict the stock to protect against employees "retiring" and going to the competitor.

Here is what I think it would cost: 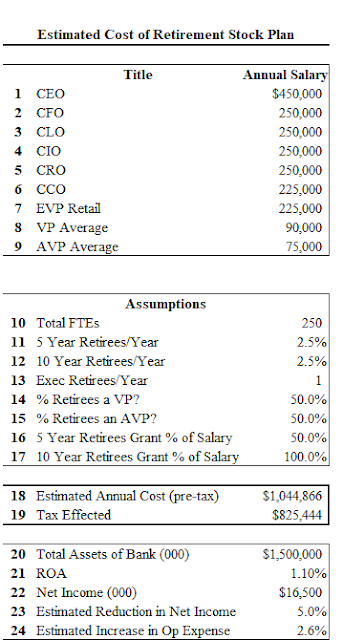 Many of the assumptions are aggressive, such as one executive retiring per year (at the average salary of all executives, including the CEO), and other employees retiring as a VP or AVP. If 5% of Schmidlap's 250 FTE employees retire annually, that's 13 per year at a $1.5 billion bank. That seems aggressive to me too. But I didn't want to undershoot the cost.

Based on my assumptions, this would cost Schmidlap $1.0 million per year and represent a 5% reduction in net income, and a 2.6% increase in operating expenses. I think banks can look hard within themselves to offset this cost with a mix of process improvements resulting in cost savings, and asset growth. My firm recently did a process review for a similar sized bank and made recommendations for $3 million in improvements, most of which were annual and recurring. We just taped a podcast with an emerging core processor that has 50% cost savings from your current core costs as a target. If half of the RSP was paid by growth, that would be $25 million in growth if it was added with a 2% incremental ROA.

I think the benefits would far exceed the costs. For one, it is a stock grant plan that adds to the bank's capital position to support growth. Second, it puts executives and employees on an even keel. It benefits both. Third, it reduces the incentive for the CEO and other executives to "pull the chord" and sell when they near retirement, which in turn helps the culture throughout the bank to manage it with an eye toward building a long-term future. It's a culture builder.

This doesn't mean the bank won't sell. If it hasn't earned its right to remain independent, that option remains on the table. And executives wouldn't be able to collect both a CIC and RSP at a sale event, in my opinion. Most states have laws that boards should consider all constituencies when making decisions: shareholders, customers, employees, and communities. An RSP would benefit all employees that gave a significant portion of their professional lives in service to the bank.

What do you think? Any other ideas out there?