My bank stock portfolio was comfortably in the black, with a solid 2.5% dividend yield at year-end. My have times changed.

Before I begin, I feel compelled to disclose that I am not a registered broker or financial advisor. I am not giving you investment advice.

At April 14, 2020, I measured all banks and thrifts with total assets between $1 billion and $10 billion. Still community banks, and have decent trading volume for more efficient pricing. At the median, these banks had a market metric slash line (P/E, P/TB, Dividend Yield): 8.8x / 95% / 3.39%. But the differences among banks varied greatly. The greatest drop in market price was Marlin Business Services Corp., at 64%. At the other end of the spectrum, Community Bancshares in McArthur, Ohio GAINED 8%! Do they finance respirator production?

I should point out that Marlin Business Services has many subsidiaries, most of them finance companies, but one is a bank.

That means, within the data, there is opportunity. And I hear about this opportunity from bankers that really, really want to buy back their stock at these valuation levels. But an abundance of caution because of the unknown, plus optics, is preventing them from doing so.

Fear of the unknown and the gravitational pull that whispers in our ear to buy high, sell low may be holding back the rest of us. It is tempting to be as liquid as possible during this period of uncertainty. But it is the uncertainty that has otherwise healthy and profitable banks trading below book value. Some comfortably below book value.

I think it likely though that most community banks will announce increases in provision, and some significant increases, due to early forbearance and payment deferment requests. And, as I said to a bank publication reporter yesterday, big banks take more of a macro-economic approach when assessing their loan portfolio. Community banks are more credit-by-credit. And that may not come to bare until the second quarter.

And this is likely contributing to the wide variation in valuations we are seeing. The below two tables represent the top 10 price declines in banks with $1 billion to $10 billion in total assets from December 31st to April 14th. 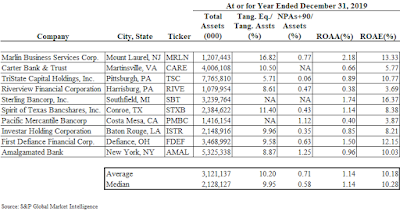 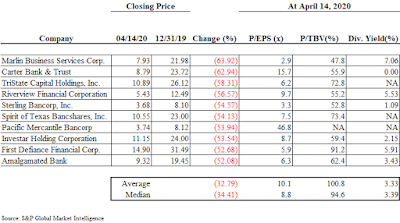 Some of the above banks have stories. For example, at first glance, First Defiance looks compelling. A 1.50% ROA, 12.15% ROE, only 63 basis points non-performing assets/assets and a 9.58% tangible capital ratio. Even if NPAs spiked, they have a loan loss allowance as first defense and their capital was very good. Why in the heck did their stock drop 53% and now trades at a 6x earnings and a nearly 6% dividend yield?

Probably because they closed on a previously announced all-stock acquisition of a $2.9 billion in assets bank on January 31st. After their December 31st earnings, but before quarter end. And before the precipitous Covid induced bank stock decline. The deal value at January 31st was actually greater than at announcement!

So there is uncertainty there, at least until FDEF announces 1Q earnings, which is not anticipated until April 28th. Even then it may not be clear because it would be challenging for FDEF to get their arms around the Covid impact to their own loan portfolio, let alone another, almost equally sized bank. Uncertainty equals discount.

And so it goes with many of the banks in the $1 billion to $10 billion in assets cohort. They have stories that are not easily analyzed by summary spreadsheet. Investors must look at loan types, non-performing loan trends, capital levels and trends, and percent of allowance to total loans. And, perhaps most importantly, management. Because good management rarely falls victim to bad circumstances over the long haul.

There are deals out there. You have to put in the work to find them.