The Battle of Luzon was one of the bloodiest battles of World War II, and the second bloodiest in the Pacific Theater. Americans landed on January 9, 1945, and lasted until the Empire of Japan announced their WW II surrender on August 15, 1945.

Although Luzon was secured by March, Japanese forces continued to battle until the war's end, and even afterward. The human toll of Luzon was significant: Japan suffered 192,000 to 205,000 dead, mostly from starvation and disease; Philippines lost between 120,000 to 140,000 civilians and soldiers; Americans lost 10,000 soldiers. 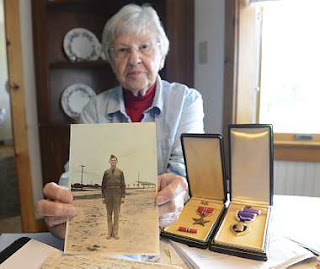 Luzon was to be the strategically significant base from which General Macarthur would direct war efforts against mainland Japan, who had seized the island in 1942. Americans first seized the island of Leyte in a significant naval battle that crushed the Japanese navy. Leyte opened the door for the landing of more than 60,000 American troops on Luzon on January 9th. Among them in the Sixth Army, was the 32nd Infantry Division, and Tech 5 Irv Earhart.

Irv hailed from Elizabethtown, Pennsylvania. He was a truck driver and lived with his parents and siblings on a 119 acre farm just outside of town. He and his brother joined the Army after the Japanese attack on Pearl Harbor. His brother, Bob, went to the European Theater, and Irv to the Pacific.

The Americans landed on Luzon with little resistance. Japan's strategy was to bog down American troops, keeping them engaged, so they had diminished capability of invading their homeland. The actual liberating of Manila and the island was effectively done by March, highlighted by Macarthur's arrival in the newly liberated city to cheering Filipinos.

But the Sixth Army pushed north to route out Japanese soldiers, whose main force was hiding in the mountains and harassing American troops. It was there that General Yamashita's Shobu Group occupied a large region resembling an inverted triangle, with northern Luzon's rugged geography as a shield. Baguio, the pre-war summer capital of the Philippines, was Yamashita's headquarters. The Americans laid siege, and Japan suffered tremendous casualties, most from disease and starvation.

The Japanese made their last stand at the Irisan Gorge, where the road crossed the Irisan River, some three miles west of Baguio. Irv Earhart's 32nd Division, which had also seen heavy fighting on Leyte, was by now worn down to almost nothing. Before Baguio fell on April 27th, Irv Earhart gave his last full measure of devotion on April 9th. He was struck down by enemy machine gun fire while tending to a wounded soldier.

Irv left a fiancé, his parents, a sister and brother. He won two purple hearts and a bronze star.

This weekend, as we push through the Covid-19 pandemic and the sacrifices we have made to beat it, remember Irv's sacrifice.

His remains are buried at the Manila-American Cemetery in the Philippines. He never returned to Elizabethtown.