In 1975, a bloody civil war erupted in the country of Lebanon between Palestinian and other Muslim guerrillas and Christian groups. During the ensuing years, Syrian, Israeli and United Nations interventions failed to resolve the factional fighting and the resulting instability and bloodshed.

In August, 1982, a multinational force, including 800 U.S. Marines, were ordered to Beirut to help coordinate a Palestinian withdrawal. They left in early September, but the vacuum that resulted from their departure culminated in a massacre of Palestinians by a Christian militia. So the international peacekeepers returned in force at the request of Lebanon by the end of September at the objection of Syria and Iran. For the next year the peacekeeping force was peppered by snipers, improvised explosive devices, and suicide bombers.

Maurice "Maury" Hukill was born and raised in Elizabethtown, Pennsylvania. A hamlet in the Scots-Irish settled area of western Lancaster County and epicenter for the Mars Chocolate Company's North American production of Dove Chocolate bars.

Maury attended Virginia Tech, and in 1981 received his degree in forestry and wildlife management at VT's College of Natural Resources and Environment. Although he did not go on to make use of the degree. Instead, he followed his father, Hank Hukill Jr. into military service. Hank was a U.S. Naval Academy graduate, a nuclear engineer and a submariner. After his naval career, Hank went on to serve at the Three Mile Island nuclear power plant, and was part of the team to restart the plant after the 1979 mishap. TMI was near Elizabethtown.

Maury chose the Marines, and went to officer candidate school to earn his commission. A regular suburban kid from my hometown volunteering to serve his country.

He was a 2nd lieutenant in the 24th Marine Amphibious Unit from Camp Lejeune, North Carolina, that was dispatched at the request of Lebanon to Beirut to keep the peace in the midst of factional fighting, religious zealotry, and regional strife.

At 0622, Sunday morning, on October 23, 1983, a non-Lebanese, terrorist driven stake bed truck loaded with explosives equivalent to 21,000 pounds of TNT turned onto an access road leading to the Marine airport compound. It crashed through a barbed-wire fence. The truck passed the sentry post and since the sentries were operating under strict rules of engagement, did not have their firearms magazines loaded, and therefore could not fire upon the truck until it barreled past them.

The truck, driven by an Iranian national, did not stop until it drove through the front entrance of the BLT building, which was housing 2LT Hukill's unit. Most were still asleep. The blast occurred almost immediately. One survivor said "I don't think there are words in the English language to describe the magnitude of the blast." It was the largest non-nuclear explosion in history. The building collapsed. 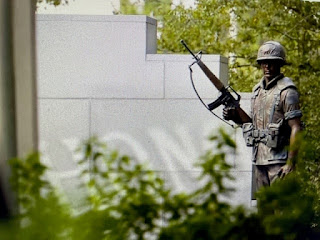 Minutes later, a second suicide bomber drove another truck bomb into the nearby Drakkar building, where French troops were stationed, resulting in the deaths of 58 paratroopers and six civilians.

A Beirut Monument dedicated to the U.S. service members who lost their lives is located in Jacksonville, North Carolina, where Camp Lejeune is located.

"Our first duty is to remember..."

While you are enjoying Memorial Day Weekend finally getting together with family and friends, I ask you to remember Maury Hukill and all of his comrades that gave their last full measure of devotion on that terrible day in 1983 in Beirut, Lebanon.

Marines of Beirut video from the Marine Corp Reserve:

History "This Day in History":