Peleliu–an island just six miles long and two miles wide–was held by a garrison of more than 10,000 Japanese troops in 1944. The island’s airfield would allow Japanese planes to threaten any Allied operation in the Philippines, and General Douglas MacArthur pushed for an amphibious attack in order to neutralize this threat.

Admiral William Halsey reported that enemy resistance in the region was far less than expected; he recommended that the landings in the Palaus be canceled entirely and MacArthur’s invasion of Leyte Gulf (in the Philippines) be moved up to October. MacArthur and Admiral Chester Nimitz followed Halsey’s advice about Leyte, but chose to go ahead with the attack on Peleliu.

On September 15, 1944, U.S. Marines landed on the western Pacific Island. Over the next several weeks, ferocious Japanese resistance inflicted heavy casualties on U.S. troops before the Americans were finally able to secure the island. The controversial attack resulted in the highest death toll than any other amphibious assault in U.S. military history. Approximately 40% of the 28,000 Marines and soldiers that saw action on Peleliu were killed or wounded. 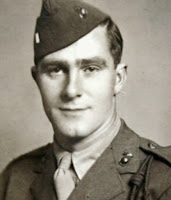 On October 12th Company K was engaged in a fierce battle with enemy troops to take Hill 140. They were holding their line but were pinned down and low in their trenches to avoid enemy sniper fire. This rendered their mortars and machine gun fire ineffective because there was nobody directing the fire, an unacceptable situation to Captain Haldane. He would not ask his men to do something he would not do himself. So he raised his head to gain bearings to pass to machine gunners. At that moment he gave his last full measure of devotion and was killed by an enemy sniper. It was three days before Company K was scheduled to be relieved.

The gruesome details of Haldane’s death were described by mortarman Romus Bergin in Islands of the Damned-Marines at War in the Pacific. The description is too graphic for me to repeat to you. Death in battle is not a Hollywood movie.

For Haldane’s actions, he was awarded a posthumous Silver Star that stated:

"The President of the United States of America takes pride in presenting a Gold Star in lieu of a Second Award of the Silver Star (Posthumously) to Captain Andrew A. Haldane (MCSN: 0-8740), United States Marine Corps Reserve, for conspicuous gallantry and intrepidity as Commanding Officer of Company K, Third Battalion, Fifth Marines, FIRST Marine Division in action against enemy Japanese forces on Peleliu and Ngesebus Islands, Palau Group from 15 September to 12 October 1944. A splendid and fearless leader, Captain Haldane repeatedly led his assault company through intense hostile artillery and small arms fire to rout the enemy from strongly held positions with heavy losses. On 12 October, he personally directed a platoon of his men against a firmly defended cave on an important ridge continuing his heroic efforts until mortally wounded by Japanese sniper fire. By his inspiring courage and disregard for personal safety, Captain Haldane contributed materially to the success of our forces in these strategic areas and his valiant conduct throughout was in keeping with the highest traditions of the United States Naval Service. He gallantly gave his life for his country."

“Capt. Andy Haldane wasn’t an idol. He was human. But he commanded our individual destinies under the most trying conditions with the utmost compassion. We knew he could never be replaced. He was the finest Marine officer I ever knew. The loss of many close friends grieved me deeply on Peleliu and Okinawa. But to all of us the loss of our company commander at Peleliu was like losing a parent we depended on for security-not our physical security, because we knew that was a commodity beyond our reach in combat, but our mental security.”

~ from With The Old Breed by E.B. Sledge

While you are enjoying Memorial Day Weekend with family and friends, I ask you to remember Andy Haldane and all of his comrades that gave their last full measure of devotion on the inglorious rock called Peleliu.

Note: I encourage you to watch the 2010 HBO Series The Pacific. Produced by Tom Hanks and Steven Spielberg, and narrated by Hanks. It graphically details the exploits of the 1st Marine Division in the Pacific theater during WWII. It may make you uncomfortable.