Deposits: Do you want a relationship or fries with that?

Regulators have been particularly harsh to those banks whose business plans call for other-than-traditional deposit acquisition. If your bank has brokered deposits, Internet deposits, jumbo CDs, rewards checking, and in some cases CDARs, a regulator near you may be calling to order you to seek more traditional funding.
This line of reasoning centers on cost of deposits and equates high-cost deposits with less loyal customers… commonly referred to as “hot money”. What it fails to consider is the true cost of deposits, while focusing myopically on one element of cost… interest expense.
Internet depositors most likely have no affinity for the bank in which they do business. They troll the web for best rate banks, assuming one depository with FDIC insurance is no better than another. They will keep their money with your bank so long as the rate is at or near the top. I concur with regulators that if loyalty is the measure, than surely this money is “hot”.
Or is it? Internet depositors are very transparent about how to win their loyalty. If you are consistently among the best rate, you can be nearly assured of winning their business. Non-Internet depositors, on the other hand, can spin a myriad of different reasons for banking with you and/or not banking with the guy down the street. I think we all can agree that predicting loyalty is easier with Internet, and yes broker-driven depositors rather than our own core depositors.
But a business model that focuses on this customer base comes at a high cost, so the logic goes. The bank that pursues wholesale and/or Internet deposit gathering will likely incur higher interest expense than those that pursue traditional deposits from “core deposit” customers. But does this come at a higher total cost?
The chart below shows four banks, each with different deposit gathering strategies. ING Bank is a pure Internet play that builds on its brand power and competitive rates to drive deposits in its virtual doors. At first, it was a pure Internet high cost money play. As its brand evolved, ING and its well-known Orange savings account has been able to attract deposits that are not priced at the top of the market. 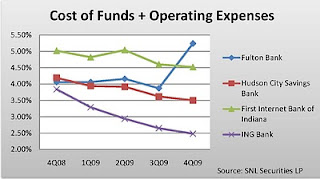 First Internet Bank of Indiana is primarily a pure Internet play that does not enjoy the same brand splash as ING. Its deposit rates are typically at the top of the market. It should be noted that both ING and First Internet are losing money. This is as a result of the asset side of their business, not the liability side. Dismissing their deposit gathering strategy due to their inability to generate profits on the asset base would not give these strategies their fair consideration.
Hudson City Savings Bank is a traditional thrift that gathers mostly CD deposits through a relatively Spartan branch network. It operates in densely populated areas, attracting large amounts of CDs per branch utilizing aggressive pricing. Most of their deposits come from the areas surrounding their branch network.
Fulton Bank, headquartered near my home, follows a traditional commercial bank strategy, pursuing the operating accounts of businesses from areas surrounding their branches. They pursue a retail strategy to generate additional funding for their commercial lending line of business. The traditional deposit gathering strategy of a commercial bank tends to have the lowest interest expense because of the relatively higher levels of core deposits, and therefore is highly favored by regulators.
Upon reviewing the chart, you will note that Fulton does not demonstrate the lowest cost. That is because I have added the banks’ operating expense (non-interest expense / average assets) to the equation. Traditional commercial banks tend to be more expensive to run than thrifts and Internet banks. To dislike wholesale deposit gathering in favor of core deposit gathering because of the interest expense only is wrong, in my opinion, which is supported by the accompanying chart.
A similar case was made in a comment letter to the FDIC on behalf of BancVue, a software development company that provides Rewards Checking product technology to community banks. Rewards checking, as many know, pays high interest rates on checking accounts, provided the customer utilizes the account as prescribed using electronic statements and bill pay (to reduce operating costs), and debit transactions (to increase “other revenue”). The FDIC considered these deposits to be high cost, and therefore would not allow banks that fell below well capitalized to offer it.
In the comment letter, BancVue representatives stated “These criteria either result in reduced overhead costs (e.g., electronic statement versus paper, mailed statement), lower risk (e.g., direct deposit) or provided additional income (e.g., interchange from debit card usage) for the bank and enabled the bank to pay a relatively high "reward" rate of interest. These criteria also result in REWARDChecking accounts being even more stable and reliable sources of funds than conventionally priced checking accounts.” These comments fell on deaf ears, and at this writing Rewards Checking and similar programs are disallowed at banks not considered “well capitalized”.
Here again, regulators myopically focused on interest expense, to the exclusion of all other costs and offsetting revenue.
I am not advocating using wholesale funding. I firmly believe that franchise value is driven by deep relationships with customers that would be difficult for competitors to replicate. Raising money via rate is pretty easy to duplicate. These deep relationships should result in greater net interest margins, higher customer wallet penetration, and a stickier customer base. But to write-off business models that utilize a higher percentage of “hot money” because of higher interest expense denies customers of having choices, limits competition, and further turns the banking model into one homogenized glob. We certainly don’t need 8,000 banks in such an environment.
Do we want an industry whose business model is limited to the good graces of our regulators?
- Jeff
BancVue’s comment letter to the FDIC
http://www.fdic.gov/regulations/laws/federal/2009/09c16AD41.PDF
Posted by Jeff Marsico at 8:49 PM