The social responsibility of banks is to increase profits.

When Milton Friedman penned his 1970 editorial in the New York Times regarding the social responsibility of business, there was much political upheaval against government and business by the newly enlightened hippie-set. His conclusion remains true, however, as much then as now: business has no social responsibility except to maximize profits within the laws and ethical norms of the society in which it operates. (see the link below for Friedman’s editorial)
Although Friedman remains highly admired, corporations continue to pursue the perceived virtues of social responsibility. Corporations are not people. They are fictitious entities. They are owned by their shareholders. Managers of corporations are not accountable to society. They are accountable to their owners. To engage in socially responsible activities for reasons other than serving your owners would be presumptuous.
But can there be a middle ground? Must we subscribe to Gordon Gekko’s philosophy that “greed is good” in its rawest form? (see video clip) I believe there could be a middle ground. A society where corporations, in a free enterprise society, pursue goals that are both socially responsible and consistent with maximizing profits. Let me explain.

Franklin Financial Services Corporation, parent company for F&M Trust Bank in Chambersburg, Pennsylvania, invests in the Franklin Future Fund, a non-bank investment company that makes venture capital investments in the Cumberland, Franklin, Fulton, and Southern Huntingdon counties. Banks typically lend businesses money, and shy away from early stage businesses with no operating history (and no real estate as collateral for that matter) because of the risk of not being paid back.

Franklin recognizes that new business generation is critical to the success of the communities in which they operate. New businesses evolve to better, more stable bank customers. They also employ members of the community. Although Franklin’s investment may not be consistent with maximizing profits in the short term, it certainly qualifies for executing a long-term strategy to grow surrounding communities so the bank may also grow and thrive. I applaud Franklin for their long-term vision, and encourage other financial institutions to participate in the success of budding businesses in their communities.
Atlantic Stewardship Bank (ASB) is a full-service commercial bank in Midland Park, New Jersey that was founded on the Biblical Old Testament tenet of tithing. Ten percent of its pre-tax profits are given to Christian non-profit organizations. Friedman would probably have scoffed at such high social ideals. But the Bank was established for such a purpose, and its owners knew the purpose when they invested. In fact, it is highly probable many invested because of that very purpose. (see link below)
In addition to attracting investors, ASB’s mission also attracts customers, particularly, Christian businesspeople. So its socially responsible mission has differentiated the bank from its peers in terms of attracting investors and customers. Has the tithe reduced the return to shareholders? As the chart below indicates, Stewardship Financial’s (ASB’s parent company) 10-year total return was 85%, compared to 15% for the SNL Bank Index (see chart). 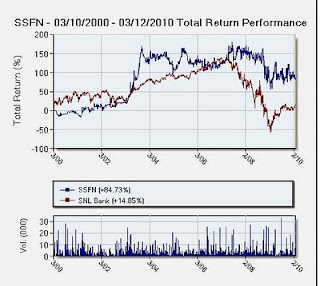 ASB gave away 10% of pre-tax profits during that entire period. Has social responsibility worked for them? Could it work for you? I think Milton Friedman would agree that social responsibility could play a key role in differentiating you from competitors and enable you to maximize profits.
-Jeff

Note: I make no investment recommendations in my blog. Please do not claim to invest in any security based on what you read here. You should make your own decisions in that regard. I have a tough enough time making investment decisions on my own.