Bankers: Who Has These Three Drivers of Value?

Two years ago bank stock analysts from investment banking firm Boenning & Scattergood identified three attributes in a financial institution that investors should look for. I wrote a blog post on it that is currently my third most read post of all time.
The three attributes were:
1. Superior Growth Prospects
2. Excess Capital
3. Strong Deposit Franchises
I can get behind these three. Can you? 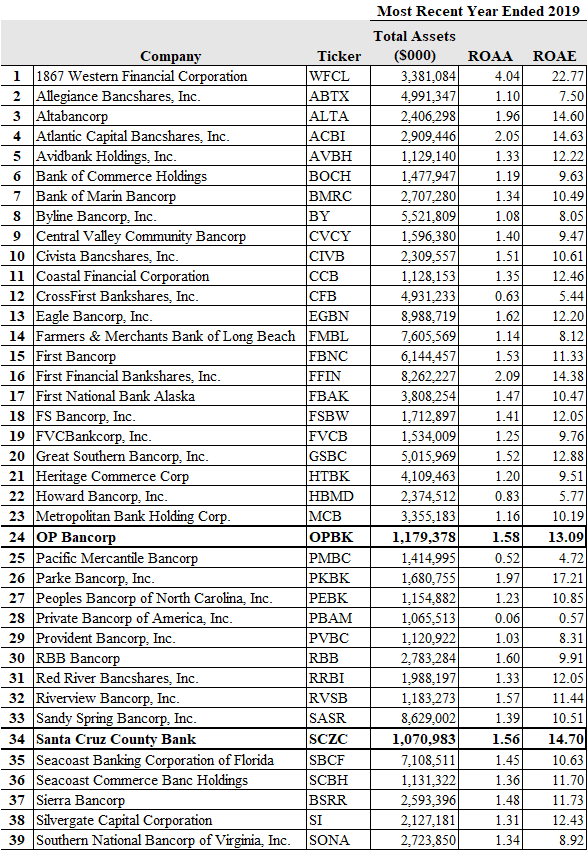 OP Bancorp (row 24) and Santa Cruz County Bank (row 34) nailed all three.
Interestingly I could find no material difference in price to tangible book and price to earnings ratios to the median of all of the Measured Banks. Is this about pandemic uncertainty? We surely should award higher multiples to faster growers, with top quartile capital, and a superior deposit mix than those that lack those attributes. But currently we don't. And perhaps that might equate to opportunity.

In terms of the two banks that achieved the triple crown, aside from both being in California (different parts), was there a commonality?
SBA Lending. Although OP had much more in terms of gain on sale of loans than Santa Cruz. Santa Cruz's growth was driven by an acquisition, and its superior financial performance was more the result of its net interest margin.
SBA lending typically results in significant levels of fee income in the form of gain on sale of loans, reduced risk as the bank maintains only a small percentage of the loan, and therefore requires less capital. However, there is a reason why this type of business lending comes with a guarantee from the SBA. The loans are riskier, and therefore more expensive to the borrower, than traditional bank commercial lending. The guaranteed portion of the loan usually gets sold to investors and the bank retains the unguaranteed, yet smaller portion of the loan.
So SBA lending can be rewarding during periods of economic expansion, and might be a headache during recessions. When I asked an institutional investor why his funds liked SBA lending and disliked mortgage lending, when both tend to be cyclical and require similar resources to originate and maintain, he said "9% premium versus a 2% premium".

Why the disparity? Hard to say. Possibly, the significant portion of SBA revenues for OP, or it has an ethnic focus and the performance of some ethnic banks during recessionary periods worry investors. Santa Cruz operates in the Silicon Valley, perhaps receiving stronger valuations based on geography. I should note that OP identifies itself as a faith-based financial institution that tithes 10% of its pre-tax profit to charitable causes. Something I wrote about recently although I omitted OP as doing this. My apologies. I consider this corporate generosity to be the natural evolution of capitalism.

The message from the analysis of the Measured Banks as compared to Boenning's three attributes that investors should look for is that each bank should be evaluated based on its own merits. And each banker, in studying the attributes of other banks that are most valued by investors ought to analyze strategies of top performing banks that generate above average growth prospects, maintain strong capital positions, and have a superior deposit franchise.

Because, pandemic or not, these are the attributes that will add value to your financial institution for the benefit of your constituencies over the long-term.