PPP urgency must be our norm.

On September 17, 2021 in the Scottsdale, Arizona desert, I delivered a speech to a ballroom full of bankers titled: 5 Things I Wish We Did Better. It was well received and was recently picked up by a banking school as an elective class.

Number 1 on that list: Project Management. I used the embedded commercial as indicative of the life span of a project at a community bank. In my presentation, I estimated the following: Time to identify high lifetime value customer segments to uncover their demands, 4 months; Actually uncovering their demands and solutions providers, 4 months; Select the solution, 4 months; Implement the solution, 6 months. That's a year and a half for those counting.

And my observation was validated at a recent bank strategic planning retreat where the strategy team said solutions contracts that they signed last year will be lucky to be implemented by the end of this year. Their experience is consistent with my observation.

This, in my opinion, is an existential threat to the relevance and survival of community banking. We have to be able to identify, implement, utilize and market technology solutions using PPP-level speed and urgency. 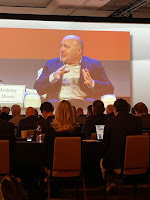 Can it be done? At Bank Director's Acquire or Be Acquired conference, Anthony Morris from nCino, in a Transformation Through Technology panel, gave a sample timeline of project implementation (time to implement) of four months, followed by a time to value (time from implementation until the solution adds value) of an additional two to three months.

I thought he was being wildly optimistic.

But Jill Castilla of Citizens Bank of Edmond told me that it took her community bank 10 days from idea to implementation for PPP.Bank, which was a critical tool in the early, wild-west days of the first wave of PPP loans. Ten days. Her bank at the time was just over $300 million in total assets and she had 56 FTEs.

Mike Butler, CEO of Grasshopper Bank, thinks rapid tech integration shouldn't be anomalous. Mike has a history of getting solutions quickly from idea, to implementation, to time-to-value in his prior life as CEO of Radius Bank (acquired by LendingClub) and now at Grasshopper. They changed their core in four months! They contracted with a vendor for online account opening in November and are flipping the "on" switch this month. What's their secret sauce, according to Mike?

- Hire a rock star CTO, which he doesn't believe is the norm in community banking. He didn't define what he meant, but in my mind I think a rock star CTO does not allow hurdles, either erected by solutions providers or internal naysayers, to slow down the bank from its current state to its desired one. A rock star CTO is a plow driver, not a caution cone erector.

- Have a killer project management team inside the bank.

- Use the API concept to circumvent the fortress that cores build around their solution. This likely requires you to have the traditional core middleware that they will charge you for, but it avoids getting on the "we'll get back to you based on your size and how busy we are" attitude that community banks suffer as a result of core dependency.

- Don't try to boil the ocean. Use the MVP concept (minimum viable product) and GO! Solve one specific problem at a time rather than trying to solve multiple or all problems. Don't wait until perfection to launch. Launch and learn, make course corrections.

Linda Stahl, Chief Revenue Officer of Paladinfs, herself a recovering core provider veteran, thinks core dependency is getting worse, citing that it used to take 80 days on average to negotiate a core contract. And it's now taking 180 days on average. Once under contract, the time to convert is about nine months. The future, in her estimation, is that the core will serve as the record keeping solution, and we will use API based plug and play based on a bank's needs. But we're not there yet. We still require the core middleware as a bridge to the future, which an estimated half of all banks do, and cores charge tolls for access to your data.

To navigate from now until a future, API-based plug and play state, Linda suggests building into your technology contracts specific service level agreements (SLAs) that have progressively sharper teeth. SLAs should essentially be a statement of work with milestones. If the technology solution doesn't meet the first or second milestone, there is a financial penalty such as credits or an outright cash payment. If it escalates to missing the third or fourth SLA, the bank can terminate the contract without penalty. Mike Butler suggests discipline in enforcing technology solution SLAs. Have some gumption. Although he used a more colorful word than gumption.

This week I noticed that my large financial institution had been charging me $15 per month for an account I used to pay my 23yo's college bills because I must have blown through their minimum balance as her college days neared the end. A tech-forward, trust-based financial institution that spends billions per year on technology should have sent notice to me or some relationship manager that this was happening. But no, I found out by accident a year after it started. If we think because our largest competitors that frequently brag about their tech spend are squared away, think again.

A key strength a community bank has over those large institutions that dominate market share is we can act quickly. The context of the strength is in decision making or making strategic pivots. This strength should not exclude tech implementation. And it is in tech project management where we need to significantly improve.

Ten percent of author royalties go to K9sForWarriors.org, who work to bring down the suicide rate among our veterans.