Leadership is taking limited information and striking down a path with the commitment needed to succeed in the endeavor. It is motivating others to follow you into uncertainty, while maximizing their ability to contribute to success. It is filling each teammates emotional tank so they self-motivate to maximize their strengths and contribute to the team.

I moderated a strategic planning retreat where bankers were debating employee development. A senior manager quipped about "coaching." The CEO asked, "do we really coach?" "I'm reading a book by Bill Cowher (former Pittsburgh Steelers head coach), and we don't do what Cowher has done."

Coaching sports is a highly accountable form of leadership. Are you maximizing the talents of individual team members? Are you improving how they work together to create a high functioning team? In sports, the results are on the board. Wins and losses. Statistics for nearly every function. In my book, Squared Away: How Can Bankers Succeed as Economic First Responders, I told how the Positive Coaching Alliance helped me become a better girls lacrosse coach, and as a result, a better leader.

The banker's comments on Coach Cowher got me thinking about coaches in my life and what they taught me about leadership. Two such underappreciated coaches were Coach McLaughlin and Coach Hewitt from my middle school basketball team: St. Paul's Crusaders in Scranton, Pennsylvania.

First, a little background. Most people that grew up in Scranton when I did were Catholic. And the middle school Catholic basketball league was highly competitive. St. Paul's usually fielded an excellent team, as was the case in 1979-80. 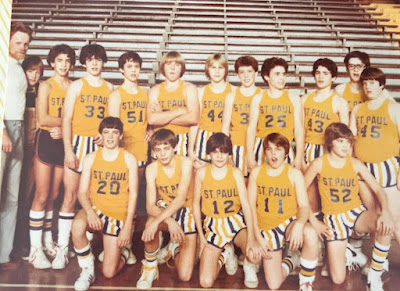 I was an average player at best. A couple notches down the bench from our best. But I had some skill and probably more potential. But my attitude got in the way. I could have been a better player. But I thought the effort wasn't worth it because I was, shall I say, in a different economic situation than most of my teammates. My father passed away when I was young. Most of my teammates had both parents, and were more affluent than me and my family. I was fortunate to receive discounted tuition so I could attend the school. My mother told me that my father, prior to his death, asked her to keep us in Catholic school as long as she was able.

This situation resulted in a chip on my shoulder that impacted my attitude, and therefore my effort. Why put forth what it will take to hone my skills only to see the privileged kids get the playing time anyway? This attitude manifested itself when a player brought up from the 7th grade team started getting more playing time than me. I promptly quit.

I was deep in the victim rabbit hole.

But my coaches wouldn't let me go. Although, looking back at it with open eyes, they should have. My bad attitude was impacting other players. My biggest regret from 8th grade basketball was not my attitude and effort, and the ease that I painted myself a victim (although both were lamentable); it was that I influenced others to share my victimhood.

What did I learn from Coaches McLaughlin and Hewitt that are instructive for us as leaders?

1.  Think Big Picture. I was what is currently termed an "at-risk" kid. I was in a single parent household where the parent worked and my choices would have a big impact on the direction of my life. I didn't know this. I was 14! But my coaches did. If they allowed me to quit, how would I spend that newfound time? And how could they influence the direction I took? In other words, how could they coach me? If you are challenged by team members with a bad attitude that impacts their effort and performance, think about how you can positively impact that person's trajectory and be a transformational person in their lives. I'm not suggesting tolerating or ignoring the attitude issue, but tackle it in such a manner that makes them better and a team contributor.

2.  Reward great attitude and effort consistently. As my attitude worsened, and my effort slipped, it opened the door for another player, likely without as much talent and potential as me (although it is difficult to self-evaluate), to get more playing time. This is exactly what happened at St. Paul's. My sulking on the bench led to another player's opportunity. He had a great attitude and worked really hard in practice. In fact, his hard work actually served as part of my rehabilitation. How can I slack while this kid is working it? The coaches rewarded him with more playing time for his attitude and effort. Even at 14, I realized it. And he deserved it. That kid went on to be a positive contributor to his high school basketball team.

3.  Learn the "Why". What if my coaches viewed me without context? Me quitting should have been accompanied by them muttering "good riddance." In my dark days of victimhood I was a detriment to the team. I was negatively impacting other players, my teammates, my friends! It would have been a very bad day for the direction of my life if my coaches had no context to my situation and what was driving my attitude. They took some lumps from me. They were stern when they needed to be. More so with me because of where I was, my behavior, and my situation. Short term I might have thought their treatment of me was relating to my economic and family situation. In retrospect, they understood my situation and tried to be the coach that I needed at that time. Each person needs something different from their leaders. It is the leaders' job to find out the "why" and approach the relationship from that context.

4.  Communicate! In a 2013 article, Lead Like Lincoln, I highlighted communication as one of our former president's greatest leadership traits. During the Civil War, I doubt any of the top generals asked themselves "I wonder where Lincoln would stand on this?" He used to communicate directly with his generals so there was no doubt where he stood on the big issues. Communication is a two way street. As the saying goes, you have one mouth, two ears. Active listening is important. When communicating with a 14 year old, my coaches not only had to listen to what I was saying, but the nuances as to what I was meaning. I certainly wouldn't come straight out and say "Why bother trying? The privileged kid has my position locked down." Classic don't try-can't fail. Even to someone my age, that would sound petty. So my coaches communicated what they were doing, and my role in it. This probably brought me back from the brink on that day that I handed in my uniform. I realized what they wanted and my role in it. They understood my attitude, and eventually I learned the basis for my attitude was wrong.

I got over it. Although it took time, and was a process not an event. By the time I crawled out of the victim rabbit hole I was no longer in middle school. So perhaps my coaches never knew the impact they had on me. But it was profound. And I have been a crusader against painting myself a victim ever since. And I credit the transformational leaders that helped me on the journey.