Bankers: Can You Create a Culture of Operating Discipline Even if You Have No or Few Shareholders? 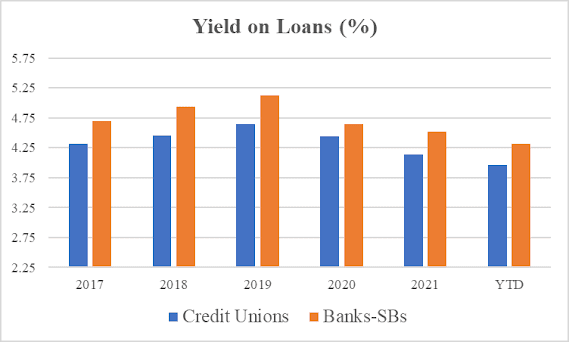 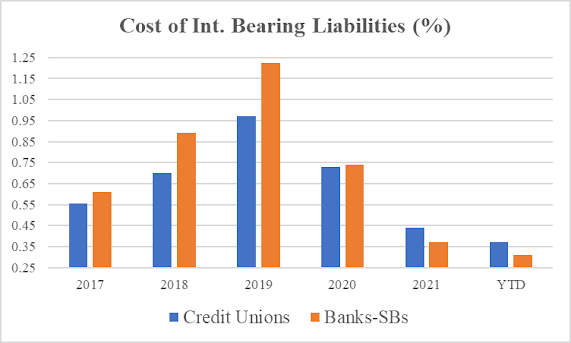 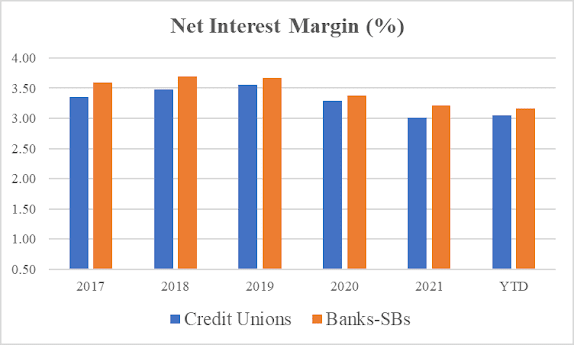 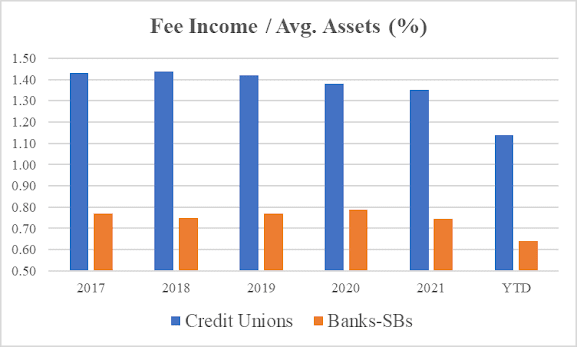 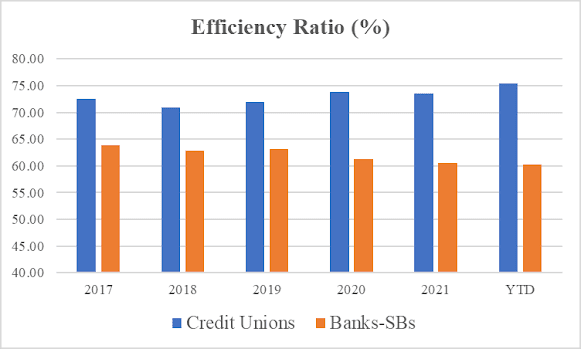 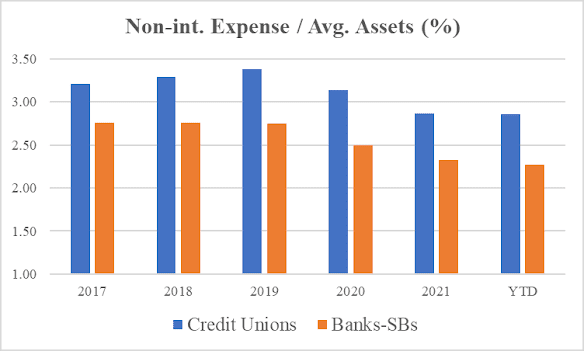 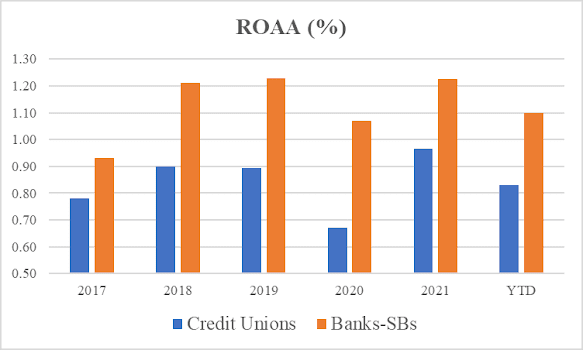 Banks-Savings Banks (SBs) between $1B-$10B in total assets have a slight edge in Yield on Loans to the similarly sized CUs, which makes sense because there would be more commercial loans and relatively fewer residential loans than Credit Unions. Credit Unions held an edge in the Cost of Interest-Bearing Liabilities until 2020 when their cost eclipsed that of Banks-SBs. This might speak to the deposit betas being higher in Credit Unions than banks, as CUs would tend to have less core business and municipal accounts. All of this led to a slight edge in Net Interest Margin in Banks-SBs. Eleven basis points YTD to be exact.
Credit Unions, however, have a noticeable edge in Fee Income to Average Assets, 1.14% YTD versus 0.64% for Banks-SBs. Before my bank friends acclaim "aha, credit unions charge more fees than banks!", I will say you would be correct in fact but the context is nuanced. Although it is my experience that CUs do collect a relatively greater amount of deposit fees than Banks, this can be partly attributable to the average balances per account at CUs. They are lower than banks. It is intuitive that they would collect more deposit fees.
This nuance would be totally lost on Rohit Chopra of the CFPB. So naturally CUs are in alignment with Banks-SBs against the CFPB's crusade against "junk fees."
Back to my point. CUs generate as much if not more revenue off of their balance sheet than banks. So why is their profitability in the form of Return on Average Assets ("ROA") noticeably and consistently inferior to banks? Twenty-seven basis points YTD inferior. Even though they pay no federal corporate income taxes?
Look no further than their expense ratio (non-interest expense / average assets). YTD the Bank-SB expense ratio was 2.27%. CUs was 2.86%. A 59 bps difference! If the median size credit union from the $1B-$10B group I analyzed achieved the bank versus the credit union expense ratio, the CU would make $11.8 million more in profit.
The CU would counter that they are a not for profit, and don't have sharholders as a constituency. Mutual banks would counter with the same. And while true that shareholders are not a constituency for either, I call bullshit on either of them not needing profits. Retained earnings is their least expensive form of capital. In some cases, their only form of capital. And for those uninitiated in balance sheets, retained earnings are generated from profits!
Now, perhaps, the lost $11.8 million is somehow benefiting one of the other three stakeholders: employees, customers, or communities. It wouldn't be benefiting customers in terms of fees or interest rates, as the analysis above shows. And the $11.8 million is from the expense ratio which has nothing to do with rates or fees.
It could be benefitting employees in the form of better compensation, benefits, etc. Or in the form of better technology. But I know of no credit union that pays their employees materially above market wages or has materially better tech than their banking brethren. I don't have the data or CU by CU analysis to make a definitive BS call, but let's say I'm skeptical.
Where I think the excess $11.8 million resides is buried in bureaucracy and infrastructure. They don't have to answer to shareholders, so the discipline of maximizing profitability for the benefit of stakeholders so often enforced by shareholders is not part of their culture.
And it's a shame. Because if they had that $11.8 million, imagine the tech investments, employee initiatives, core deposit special dividends, or community support they can provide.
For those that are not shareholder owned or are privately held, implement cultural operating discipline so you have the resources to be relevant, even important to the other stakeholders.
~ Jeff
Posted by Jeff Marsico at 4:33 PM