I-Banker Will Work For Food

Bank Director Magazine had its annual "Acquire or Be Acquired" conference last week. Surprisingly, an investment banker from a regional investment banking firm opined that a flood of capital was going to enter the banking industry, triggering "hundreds of bank mergers". Well, given the chart below, his colleagues hope he is right. There is tuition to pay for the kids! 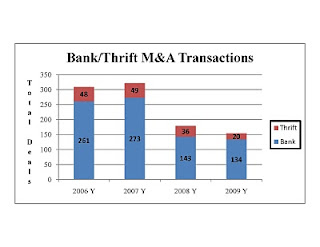 Well, perhaps he is a little over excited. When there are half as many deals, there are half the transaction fees. Tough sledding for financial services investment bankers.

Do you think there is no better time to buy?
Posted by Jeff Marsico at 7:30 PM