On December 31st, a great banker retired: Bill Davis (pictured). I have known Bill for about 10 years and like him as a person very much. But also important is how much I admire his former employer, Norwood Financial (Nasdaq: NWFL) and bank, Wayne Bank. I wondered if others shared my admiration, so I searched one year of archives on American Banker for Bill's name. Zero hits.


What of other bank lumineries gaining so much attention these days? John Stumpf, CEO of Wells Fargo, had 13 hits. Jamie Dimon, CEO of JPMorgan Chase, 1,450 hits. These fellas have very little to do with the number of articles an independent industry newspaper prints about them, but it is an indication of the level of importance we place on the very large financial institutions in our country.

Of the big banks, Wells Fargo and JPMorgan Chase certainly stand out as excellent performers. In the wake of the most dramatic industry disruption since the Great Depression, Wells managed a 1% ROA in 2009, and JPMorgan managed 0.58%. Comparatively, banks across the country had a 0.17% ROA in 2009. Not too shabby Mssrs. Dimon and Stumpf. 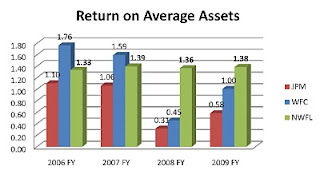 But hold on fellas. Take a gander at the accompanying chart. It appears Mr. Davis and his community bank outdid them both in '09, and blew the cover off of the industry. Looking back to 2006, the years Mr. Stumpf assumed WFC's presidency and Mr. Dimon ascended to JPM's CEO chair, Bill Davis fared relatively well.

I used ROAA as a comparative measure. But keep in mind that JPM and WFC have high levels of fee income as a percent of operating revenue (49% and 48%, respectively, for 2009). NWFL's fee income/operating revenue was 20%. This means that JPM and WFC are generating more revenue without the need of those pesky assets, which typically inflates ROA. Even without the advantage of high levels of fee income, Bill Davis stands tall among industry giants.

My favorite Bill Davis story is the day I was summoned into one of his Board meetings to make a presentation. At the end of the presentation, I waited in the "ante-room" (those of us that present to Boards know what I'm talking about) to wait for Bill to emerge. He did, and told me that he and the Board liked what I said, but didn't like the goatee I sported on my face. Next time in front of his Board, I would have to be clean shaven. That's old-time banking!

Bill reached retirement age, and handed the keys to the bank to his successor, and moved out of the executive suite. A refreshing succession because so many bankers these days lack the humility to think that others can lead as well as them, so they sell their bank at the end of their careers.

Bill is humble, and a great banker. Our industry should salute him.

Special note: I am not making stock recommendations here. So don't call your broker to make a trade based on what I write. If you saw the performance of my stock portfolio, you would know what I mean.
Posted by Jeff Marsico at 12:47 PM