Real Estate: Love it or hate it?

Economists and government officials continue to cite lack of lending activity as a key contributor to our economic malaise. At the same time, I keep hearing from bankers about the lack of credit-worthy borrowers and regulatory pressure regarding the quality of the bank loan portfolio. I am also seeing a rise in bank cash positions and a decline in business loan (C&I) portfolios (see chart). As I understand it, government officials (excluding regulators) want banks to lend, banks have the cash to lend, bankers are hesitant to lend, and regulators would just as soon have you hire another compliance officer and purchase a U.S. Treasury. 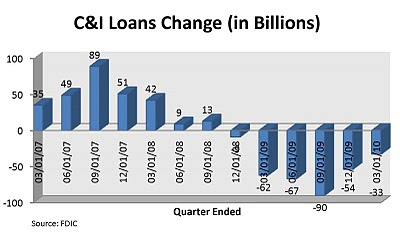 Much of the standoff revolves around real estate secured lending. There is little doubt that bankers like real estate as collateral for loans. Countless bank CEO's, senior lenders, and bank directors tell me so. This preference resulted in real estate assets (including mortgage-backed securities) representing 44.1% of total assets at March 31, 2010 (see link below).
Regulators are slightly schizophrenic on the subject. They imposed limitations on the amount of non-owner occupied commercial real estate (CRE) a bank should carry, and they link the value of the loan to the value of the collateral backing it. How will these conflicting views on real estate work itself out over the near term?
What I suggest regulators consider is collateral alternatives. Our current slump, which started at the end of 2007 was real estate driven. When sub prime and similar loans began to default, other borrowers began tightening their belts and began to de-leverage, leading to a recession. Pundits spoke confidently and often about prime mortgages and CRE being the next shoe to drop. The result was a decline in real estate values (see table below).

Amidst all of the calamity, the median home price in the U.S. dropped 24% from 2007 through the first quarter 2010. It makes you wonder what has happened to the values of alternative collateral such as vehicles, inventory, or receivables? Are these more reliable? One regulator, on a panel at a banking conference, told a tale of a recent conversation he had with his regional director. A bank this regulator examined was increasing the level of CRE on its books beyond the 300% of capital target. The regional director voiced his concern, to which the examiner responded "what alternative to real estate as collateral should I suggest?" He didn't hear from his boss on the subject again.
Bankers, on the other hand, should study carefully the direction of the national and their regional economies. What segments are growing? Do these segments typically have real estate to offer as collateral?
Let me offer a story. Let's say Ted owns an environmental engineering firm that he started five years ago. He used his own money and a home equity loan to get it going. Today he has $2 million in revenue, $200k in capital, and 10 employees headquartered in a leased office. An opportunity presents itself to pick up five new employees. However, Ted projects the growth will put him in the red for two years. He would like to get a loan from his bank but doesn't want to use his home as collateral because he is not confident he has enough equity and his wife was none-too pleased about doing it the first time.
Would your bank lend to Ted? Let's take the story further, assuming the firm secured a C&I loan from a bank. Now the economy goes in the tank and the firm has a pretty bad year. He puts some additional equity in the business to get them through, but when submitting his financials to the bank, the loan now doesn't cash flow. Will the bank write down the loan at the behest of regulators or on their own accord? Will they encourage Ted to refinance with another bank? Or will the bank see Ted through this difficult period?
If you're a regulator reading this, my guess is you would make the bank take a larger provision and/or write down the loan. If you're a banker reading this, my guess is you wouldn't make that loan without real estate as collateral. But we have to ask ourselves how long we can continue to lend to commercial building owners while avoiding lending to the businesses, like Ted's, within the building? It's those businesses that are likely to drive our economy in the future.
This has been an unusually long post. So I must summarize. Real estate continues to be a reliable source of collateral to lend against, even considering the recent downturn. Regulators should take note. But the businesses likely to fuel the U.S. economy into the future may not have real estate to offer as collateral. Bankers should take note and be prepared to finance them.
- Jeff
FDIC: Quarterly Change in C&I Loans
http://tinyurl.com/25rz9a