Back of the Envelope: Branch Acquisition Math Made Easy

On Sunday, July 31st, First Niagara Financial Group Inc. ($30.89 billion) agreed to buy 195 Northeast branches with approximately $15 billion in deposits from HSBC Holdings Plc for an approximate 6.67% deposit premium. During a conference call the next day, First Niagara President and CEO John Koelmel said the bank will divest 100 of the branches and will likely sell about two-thirds of the divested branches and close the others.
Aside from making the announcement on a Sunday, it is odd to strike a deal only to have to divest over half of the bounty. But the branch divestiture has some upstate New York financial institutions circling branches like hyenas around a wildebeest.
Branch purchases are on the mind of many CEOs these days as a means to accelerate growth to achieve the perceived scale necessary to absorb increasing, non value added costs such as compliance and systems security. Nobody knows how big they have to be, just bigger. Sort of like professional baseball players in the late 90's.
But it is not important enough to just be big. As noted in a prior post regarding how FIs failed to reduce expense and efficiency ratios as they grew (see link below), it is more important to be smart than big. Take this from one who invested some of my daughter's college money in Sovereign Bank, a bank that prayed at the altar of bigger is better, only to have me work harder to fund the money I lost. The lakehouse will have to wait. 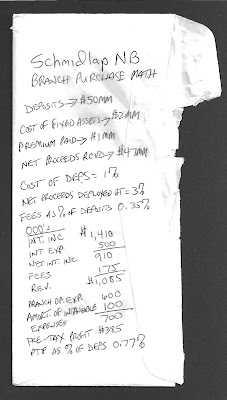 Analyzing the impact of a branch purchase is not particularly complicated. I ran a hypothetical analysis on the back of an envelope for Schmidlap National Bank buying a $50 million in deposits branch from First Niagara (see photo).
Counter-intuitive for those not initiated in branch purchase is that the buyer actually receives funds.  For example, if Schmidlap buys $50 million in deposits for a $1 million premium and the value of the fixed assets of the branch (including real estate, tables, desks, everything except the signs) was $2 million, Schmidlap would get a check for $47 million at closing from First Niagara.
Except if you listen to some of my early adopter bank marketing or IT friends, First Niagara would more likely remit payment via a QR code on their smart phone.
Schmidlap would have to pay the interest expense on all $50 million of deposits. They would also have to amortize the premium paid over some period. In this hypothetical case, it amortizes straight line over 10 years. There are limited exceptions to having to amortize the entire premium. And First Niagara may very well be able to put some of their premium paid in goodwill. But when acquiring only one branch, such as what Schmidlap is doing, it is likely the whole premium will be amortized. This is a non-cash charge, but an expense nonetheless.
Since Schmidlap only receives $47 million in net proceeds, that is what they have to invest in either loans or the investment portfolio. Yields on bank qualified investments are so low these days, that for any branch purchase to be anything more than a single at best, the buyer would hope to deploy proceeds in loans. In Schmidlap's case, we assume that they can put the net proceeds to work at 3% and the deposits cost 1%.
When all is said and done, this branch purchase will only drop $385,000 to pre-tax profit. Readers may think that $385k is better than nothing. But this represents only 0.77% pre-tax return on assets. If Schmidlap has a better ratio at time of closing, than this transaction would bring their pre-tax ROA down.  If the bank allocated $4 million of capital (an 8% leverage ratio) to support the branch, that would yield a 9.63% pre-tax return on equity.
Not exactly a home run, would you agree? But Schmidlap would be bigger, just not better. Or am I looking at it wrong? Doesn't bigger equate to better? Barry Bonds thinks so.
~ Jeff
Does your bank achieve positive operating leverage? Post regarding expense & efficiency ratios:
http://jeff-for-banks.blogspot.com/2011/05/does-your-bank-achieve-positive.html