Could the past two years have been worse for Wells Fargo (WF)?

According to an appropriately snarky Gonzo Banker post by Scott Hodgins, Wells' blunders are epic:

September 2016 - Disclosed that they created two million bogus accounts without customer consent to hit the bank's "eight is great" cross-sell targets. That fiasco cost them over $800 million in fines and legal settlements.

September 2016 - Wrongfully repossessed service members' cars. Some of whom were deployed overseas. Thirty million in fines and restitution.

April 2018 - Agrees to $1 billion in settlements for auto loan and mortgage abuses.

The spate of bad news led to Wells launching a nationwide ad campaign to repair its image.

They admitted altering business customer data to address anti-money laundering compliance. Fined by the SEC for pushing inappropriate investment products. Finally got their financial crisis fine. Admitted to 400 wrongful housing foreclosures. And yesterday the Wall Street Journal reported that the OCC notified Wells that "the bank also has failed or isn't expected to meet deadlines on around two dozen technology-focused OCC regulatory warnings... that have been issued since 2014 or earlier."

How many people are in their public relations department? You would think not nearly enough.

I recently addressed a bank client's all officer meeting to discuss industry trends. As part of my comments, I presented the following table of New Jersey Deposit Market Share. I also included the USA deposit market share. 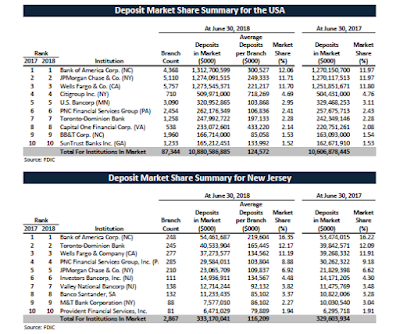 restriction. No wonder why Teflon Tim is smiling in his investor relations pic. I thought it was the green tie. Luck of the Irish. That sort of thing.

So what is it about the bank that has allowed it to endure such bad news, such regulatory scrutiny, and such a mountain of fines and restitution? Superior technology? Nationwide network? The stagecoach?

Wells' challenges are a blinking light for a larger problem. Notice the bigger banks all held serve and maintained leading market share. As community banks, we have not developed a strategy to break through.

So the operative question is, should we be more focused on slaying dragons in our strategic and operating plans? Or, should we be content swatting at gnats? Because the dragon should be wounded.