The Death of the Community Bank

In June of 2008 I gave a speech titled "The Death of the Community Bank" and in that speech I made predictions. Recently I was cleaning out my files and I ran into the hard copy slide deck that accompanied the speech.

If I ignore where I was wrong then I am as guilty of willy-nilly prognostications that I sometimes think industry pundits engage in. So, below is a list of predictions I made and if I was right or wrong, or somewhere in between.

Prediction: The General Bank will become extinct. Much like the General Store fell victim to the supermarket and the lumber yard fell victim to Home Depot, I predicted the community bank that did not pick targeted customer niches or develop product expertise will meet it's doom. The anecdote I used was how the Stephen's Island Wren was rendered extinct by a lightkeeper's house cat. That might be an exaggeration, as many feral cats feasted on the flightless bird as well. Much like competitors nip at community banks' customers.

Result: Mixed. A mid-2020 survey performed by Cornerstone Advisors showed that 51% of retail customers that opened a new bank account within the last three months did so at a large, national bank. Eighteen percent of that group opened an account at a digital bank. Two percent opened an account at a community bank. When I made that speech in 2008, there were approximately 8,500 FDIC-insured financial institutions and today that is around 5,000, a 40% decline. However, last year's top 5 total return to shareholders post had two traditional community banks on that august list. So there are community banks that bring discernable value to their shareholders and other constituencies. They can have the operating discipline and service to their constituencies to earn their right to remain independent. And I had ING Direct as an example of who might be the lightkeeper's cat to the community bank. A bank that was purchased and is now, well, extinct.

Prediction: Community Banks with < $10 billion in total assets will continue to lose market share. Here was my chart to support the prediction... 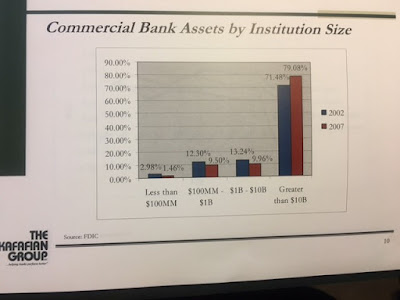 It was a pretty alarming slide.

Result: I was right. I ran the numbers again. Banks and savings banks with greater than $10 billion in total assets control 86% of all FDIC-insured assets and 85% of deposits for the most recent quarter. The days of getting in the ring and slugging it out for market share with other community banks are done. Strategies cannot ignore big banks any longer.

Prediction: Banks with < $500 million in total assets must have superior net interest margins (NIMs) to deliver financial performance. Here is the slide that accompanied the prediction... 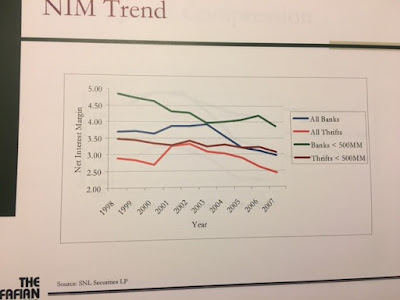 Result: Mixed. Banks with less than $500 million in total assets delivered a 3.82% NIM at the median for 2019, while banks above that size was 3.67%. So smaller institutions continue to enjoy a NIM advantage, but not to the extent they did in 2007. And the ROA for <$500MM banks was 1.08% versus 1.22% for the rest in 2019. I used 2019 because of the NIM compression caused by PPP loans and the outsized impact that had on smaller institutions. And I did not filter for Sub S banks, so the ROA difference was probably greater. Having said that, the ROA difference was only 14 basis points. With a narrow advantage on NIM, size is a factor to drive down costs to elevate the performance of smaller banks to that of larger banks.

Prediction: Community banks must solve for the profitability of fee-based lines of business to generate superior results. Here is the slide I used to support the contention... 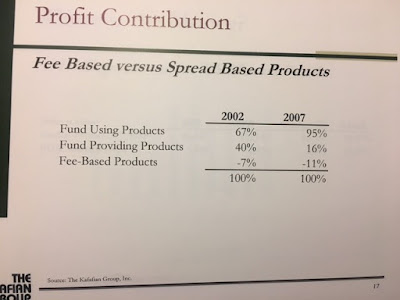 Result: Mixed. If I put a column in the above chart for third quarter 2019 fee based products profit contribution was -6%. This is from my firm's profitability outsourcing service, which is mostly community banks. In a low rate environment, deposits are less valuable and therefore less profitable. In terms of fees, community banks have not solved for making this a contributing element to their profit picture, yet they remain profitable. Imagine if they did operate fee-based lines of business profitably. That would be an ROA/ROE accelerator.

Prediction: Senior management will migrate to being strategists, coaches, and leaders rather than tacticians. Here is the slide I used on how leadership should spend their time courtesy of The Breakthrough Company by Keith McFarland. 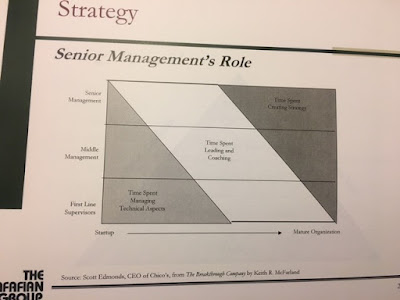 Result: I was wrong. Although I do not have statistics, only observation. I often hear the "day job" comment regarding strategy execution. In my view, senior managers spend their time more like the first line supervisors in the slide above rather than how the then CEO of Chico's suggest they should spend their time. Could this be a factor in how slow we've moved in adapting to customer needs? Are we spending more time solving for tactical issues rather than moving us closer to our aspirational future?

How do you spend your time?

But the big mea culpa is in the title of this post. As I write, community bankers across the country are helping struggling small businesses with PPP loans, much like they did in the spring to quickly distribute this critically needed funding jolt. In the words of FDIC Chair Jelena McWilliams, community banks were the economic first responders during the pandemic. So in terms of the Death of the Community Bank, I WAS WRONG.

And thankfully so. Let's work together to keep me wrong.