Bankers: Just Do It!

"That's all fine and good, but if your bank doesn't do it or the reporting doesn't get to the front line, how can we improve?"

Sing from the same sheet of music. Row in the same direction. Everyone should be on the same page.

Do we really want this? 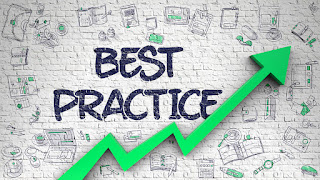 I'm finishing my annual tour of the West teaching bank profitability as part of various states' Executive Development Programs. Students are typically mid-level and have high potential. As part of that class, we drill down from "top-of-the-house" financial metrics, such as ROA, Net Interest Margin, Efficiency Ratio, to the most granular numbers, such as the ROE hurdle rate of a customer relationship.

Because if we want everyone from the Board Room to the customer contact person to "sing from the same sheet of music", why on earth do we have executive incentives tied to Return on Equity but hold lenders accountable for loan volume? It is inconsistent. In fact, it incents lenders to work against your ROE, promoting larger, thinly priced deals without regard for structure, duration, or capital needed to support the loan. It is the antithesis of "rowing in the same direction."

Imagine, holding lenders accountable for the continuous pre-tax profit and ROE improvement of their loan book, like the table below. 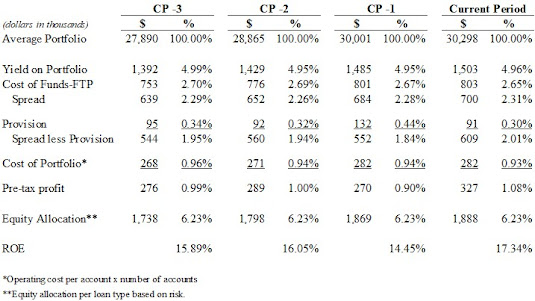 We either: don't do this (most likely), or do this but allow naysayers to poke holes into the art part of management reporting because they don't look particularly good (lack of leadership), or do this and keep it bottled up in the executive suite (nice to know). I realize my firm has self-interest in the first reason because we do this on an outsourced basis for financial institutions. But that aside, everyone should do this! Imagine the behavioral changes this would foster. Behaviors we now try to control with incentive schemes to offset the unintended negative consequences of incenting on volume.

I recently wrote about Branch Profitability in Practice, so I won't belabor the point on holding branches accountable for continuous profit improvement.  A bank CEO recently asked me if I thought using branch pre-tax profit rankings amongst all of his bank's branches would be an incentive that is consistent with the bank's strategy. Knowing the CEO's passion about being a superior financial performer, of course it would! His top quartile branches in pre-tax profit should receive a greater bonus pool than his bottom quartile. Again, this bank has the luxury to do this, because they measure profitability of their branches. Those that don't use deposit growth, or net new accounts, or some other metric that's easy to get out of their core but may not be consistent with strategy.

Don't leave support centers in the lurch. If you incent your Compliance Department with no audit exceptions, should it be a surprise that it was next to impossible to get online account opening off of the ground when branchless banks have been doing it for a decade? How about incenting them on how quickly audit exceptions are cured? Think of the cultural change.

There are ways to incent other support centers to row in the same direction as strategy. If the executive team is incented on being efficient compared to peer, wouldn't it be consistent to incent the Loan Servicing Department on their operating expense to average loans? That combined with loans serviced per Loan Servicing FTE would make for a transparent incentive that has that Department singing from the same sheet of music as the overall bank.

I think I've thrown enough management bromides at you.

Imagine if the branch gave the best service to those customers most valuable to that branch. If only they knew who they were. Maybe we should.

Instead of accepting how we currently do it, perhaps we should do it like it should be done. In a changing financial world full of shiny objects and the need for focus, we should know the profit trend of the residential lending department, our commercial lenders, our branches, and our most valuable customers. How else would we know they are the most profitable?

Stop accepting incentives not consistent with strategy. Don't leave profitability behind in your data journey.